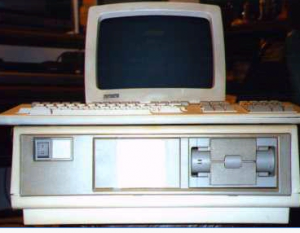 Amidst all the content that spewed out of SaaS ERP vendor Workday’s Tech Summit this week (disclosure: Workday is a current client, although I was not able to attend its event in person), there was one blog post that really set my teeth on edge. Fellow Enterprise Irregular Josh Greenbaum and I rarely see eye-to-eye on SaaS and his assertion that multi-tenancy is a vendor, not a customer, issue â a supporting tweet called it the ‘Intel Inside’ of SaaS â elicited this counter-tweet from me: “Yep, & single tenancy’s the DEC Rainbow of SaaS.” Knowing that a single tweet doesn’t carry the same weight as a blog post, I decided to elaborate on the analogy as soon as I had the opportunity, so here we are.

The allusion to the DEC Rainbow will be somewhat obscure to those of you reading this who are younger than the age of, oh, 48 or so. Therefore you’ll need to bear with me for a short history lesson. My first job in the computer industry started in November 1985 when I joined one of the UK’s leading microcomputer resellers eighteen months after the UK launch of the IBM PC. The dominance of what was then known as the IBM architecture (it was only much later that people realized it was really the Wintel architecture and not IBM’s at all) was just starting to become clear and one of my first jobs was to help clear the company’s remaining stock of Apple Macs. I had heard of Apple, but there were other, even more mysterious pages in the reseller’s printed catalog (this was in the days before the Internet, remember). There was the DG/One laptop and a double-page spread devoted to the DEC Rainbow. What I found curious about this machine was that it had an Intel processor and MS-DOS and it would run all the same leading business software titles as the IBM PC, but you still had to buy DEC Rainbow-specific versions of those titles.

What I later learnt was that DEC, at the time the number two computing vendor after IBM, had taken an approach to the microcomputer revolution that I’ve since seen repeated in many later generations of technology. The company looked at a new emerging trend and latched on to the elements of it that made sense from the company’s own perspective. It saw a new commodity platform emerging and thought it could do a better job of offering the same capabilities with its own proprietary technology (funnily enough, IBM later on attempted the same approach when it tried to divert the PC architecture into a proprietary fork called Microchannel. That effort failed too).

Now we’re seeing history repeating itself once again. This time the existing generation of established software vendors look at the new commodity platform of cloud computing and they say to themselves, ‘I like this way of doing things, but I can do it better if I do it in my own proprietary way.’ So they come out with their single-tenancy, private cloud implementations with all the usual proprietary lock-in that they’re used to building into their business models, and they completely miss out on the wider context that differentiates the cloud from earlier models. Customers buy into what they’re offering because they trust their existing vendors and they’re suspicious of these upstart newcomers that have no established track record. They believe the vendor spin that simply by virtue of including certain features in common (Intel 8086 processors and MS-DOS in the case of the DEC Rainbow, virtualization and automated provisioning in the case of cloud computing), they’ll capture all the advantages of the new model. But in truth, they simply don’t get it.

So let me spell it out. Multi-tenancy is not the ‘Intel inside’ of SaaS and cloud computing. Actually ‘Intel inside’ was a marketing campaign that Intel starting running when it realized that the PC architecture was bigger even than its own microprocessor architecture, and that rivals like AMD had an equally legitimate claim to compete for a slice of the same market. In exactly the same way, multi-tenancy is bigger than any single vendor because it is one of the most defining characteristics of cloud computing.

To say that multi-tenancy is only of interest to vendors and has no relevance to customers is a bit like saying Wintel compatibility is only of interest to PC manufacturers, and so customers should not worry about it. Try telling that to the enterprises that invested and wasted millions of dollars in rolling out DEC Rainbows or IBM PS/2 Microchannel machines in the mid- and late 1980s. If a vendor is selling you a proprietary dead-end that will be obsolete before its time, I’d say that’s a factor of huge importance to customers. Don’t let anyone tell you any different.

2 responses to “Single tenancy, the DEC Rainbow of SaaS”