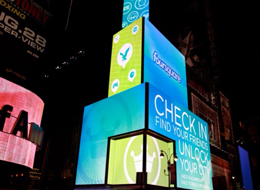 Over the weekend, Foursquare scored a major coup via a new partnership with American Eagle: they got their name and logo plastered all over Times Square. The first story I saw on the subject was on Mashable, where blogger Samuel Axon noted,

“It seems like just a short time ago that these location services were only used by a few hardcore web tech geeks. Now they’re so mainstream that they’re taking up a chunk of the New York skyline.”

Foursquare has just over three million users and you need a smartphone to use it. It is far, far from “mainstream”. And the article in Mashable feels like something I’ve been seeing a lot of lately – mistaking a brand using a niche and emerging web service (the “shiny object” in the title of this post) as a way of positioning themselves as cool and hep, for some sort of validation of something as “mainstream”.

From where I sit, Foursquare and other location-based applications will be mainstream when they have 500 million users globally. Even Twitter, with 87% of American consumers aware of it but only 7% using it, is not mainstream (see: Facebook, Google).

CMO at Aimia, Advisor atBeringer Capital. Previously SVP Global Digital Marketing at SAP, Founder and CEO of Social Media Group. Maggie has been interviewed about social and digital trends by Inc. magazine, The Washington Post, CBC Radio, The Globe and Mail, CBC News, CTV News and The Financial Post, among others.

One response to “Foursquare: Shiny Object or Mainstream?”