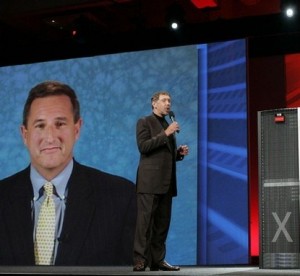 It’s open season in the punditocracy on Oracle, as the move to put Mark Hurd in Oracle’s corner and jettison Charles Phillips makes a helluva welcome-back-to-work present for anyone who actually took Labor Day off from their daily labors.

What’s obvious from where I sit is that Oracle is now more firmly a hardware company than it was last week, when all it had in the hardware category was a company called Sun. Indeed, with Mark’s ascendancy and Charles’ (can we now go back to calling him Chuck?) “retirement,” the real question, lawsuits and succession planning aside, is whether Oracle’s applications product line will ever become a major part of the company’s product focus again.

Not that Thomas Kurian, who runs the whole apps show at Oracle, can’t come up with a strategy – he has, or did, though the part of that strategy that includes Fusion Apps seems to have been shuffled off to wait-and-see land. But can Kurian now drive an apps strategy in a company that has just been taken over by the hardware jockeys? I’m personally worried, for Oracle and its customers.

The problem is that Kurian’s ability to keep apps in the forefront at Oracle was already in trouble from the Sun acquisition, and those of us who have watched Oracle lo these many years have seen this movie before. It may be hard to imagine, but until Oracle went on its M&A spree in 2003, the company’s commitment to the enterprise applications market was in question. eBusiness Suite had had a couple of rough releases, and key enterprise applications advocates like Ray Lane, Gary Bloom, and Mark Jarvis had left the company. As the post-dotcom era unfolded, the company was more and more focusing on its database and middleware roots, and those of us who followed the apps side of the business were wondering whether Oracle was going to be another also-ran in the apps business.

That clearly changed in 2003, and one of the principal architects of that plan was Charles Phillips, who, when we was still called Chuck, was among the acknowledged experts in enterprise software among the financial analyst community. He showed up at Oracle just as the battle for PeopleSoft was winding up, and he clearly put his imprint on the incredible string of software acquisitions that Oracle undertook as the decade unfolded.

I have to imagine that part of the reason that Phillips has left Oracle is that the Sun deal represented the beginning of the end of the primacy of enterprise software at Oracle. Not that the company is going to jettison its current apps, not a chance. But it’s clear that the Sun acquisition has pulled Larry Ellison’s attention away from apps, and that it’s looking like 2000 (the year Ray Lane resigned) all over again.

In this light, I have to wonder if Charles’ gaffe over the supposed $70 billion M&A fund earlier this year wasn’t a ploy to float his last and final position on the company’s strategy in the public domain in order to see which way the wind was really blowing. It’s been done before – though that’s more of a Washington DC inside-the-beltway ploy than a Silicon Valley ploy. Regardless, his reprimand came swiftly, and the rest is history.

So, with Mark Hurd “replacing” Phillips, and a host of Sun people now swarming through the executive offices of Oracle, it’s hard to imagine that the apps group will be more than an adjunct to the hardware side of the business for some time to come.

Let’s be honest – Sun’s enterprise apps strategy was almost as robust as HP’s, and that’s not saying a whole lot. Each company has squandered numerous opportunities to more synergistically blend enterprise apps with their hardware and software technology lines, and, while I will give Hurd the benefit of the doubt now that he is actually running a major enterprise software company, the proof will be in a strategy that does more than make Oracle’s apps something they sell to make the hardware business run.

My final concern is that Oracle is more and more emulating IBM, a company that eschews enterprise applications in favor of a tools and technology approach to the market that puts Global Services in charge of creating one-off, highly profitable, enterprise apps that compete more and more with packaged solutions. If Larry continues his quest to be the next IBM, it would mean more marginalization of enterprise apps in years to come.

All of this can change in a couple of weeks, when Oracle Open World descends on San Francisco (with some questions about how the current game of musical chairs will sort out) . I will be there watching for signs that I’m wrong, and not so secretly hoping I am. For if Oracle is truly downgrading enterprise apps, then its customers and the market will be all the more poor for that downgrade. And that would be the biggest shame of all.