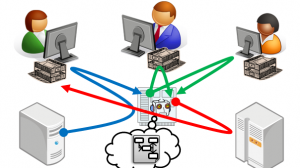 There are 150 million Lotus Notes users worldwide, and many of them are prime candidates for cloud-based alternatives â a prospecting opportunity the sales teams at both Google Enterprise and Microsoft Online Services are well aware of.

But although Google Apps can replace the email and document sharing capabilities of Notes, it lacks a workflow component â an essential ingredient of many existing Notes applications that enterprises have developed over the years. That missing component has provided a useful opportunity for RunMyProcess, a startup based in Paris, France, which offers an integration and process design platform for cloud applications, and has just closed its first round of venture finance.

A large number of its customers â distributed across Europe, South America and Asia â are migrating to Google Apps from Lotus Notes. RunMyProcess provides the glue that binds on-premise application data into a Google spreadsheet or progresses a document through an approval process. Because of its focus on orchestrating processes where human beings interact with data flows, RunMyProcess has carved out a distinctive niche for itself in comparison to other cloud integration vendors, which have tended to focus on automating the exchange of data. It may prove to be a fertile pitch. As founder and CEO Matthieu Hug told me: “Very few things are end-to-end automated within an enterprise context.”…