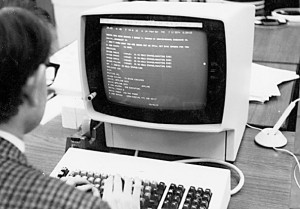 Some say the online world is headed for apps because people prefer apps.  Some say they hate apps and prefer everything to be as browser-like as possible, even if that means a return to 3270 green-screen UI.

I don’t buy that “apps are where it’s at”  (http://gigaom.com/2010/08/13/gowalla-ceo-sorry-mobile-web-users-prefer-apps/)  I think that the reason apps are surging is because of app stores.  As you know, building a business is only partly about the product.  If you don’t have a great channel to reach your customers you won’t get anywhere.  Mobile web implementations can be very compelling and so I think apps are winning because they have a channel.  Some things like games seem much more appropriate as apps, but for many apps, mobile web seems more appropriate.  Now, if we can deliver mobile web through an app store channel, I think you’ll see a much better split.

I did mention that apps were more monetizable, and I think Bill picked up on that, but it isn’t the monetization alone that’s driving apps.  People actually like them quite a lot.  And, I think if you try to have web pages that are behind pay walls, that is fraught with peril as has been discussed in so many other places.  Pay walls have been tried and found wanting because they just don’t feel right.

What is that fundamental difference between apps and browsing?  How do we know when to pick one or the other so it will feel “right”?

We are the end result of evolution, despite a certain amount of protestation from some quarters.  As such, our minds have very powerful patterns active in them that were set into place long ago.  It is no secret that a powerful mnemonic device is to tie the items you’re trying to memorize into a memory of a physical place.  Try to make it as concrete as possible, remembering how that place looks, how it smells, how it sounds, how it feels, and how to get there.  Lock it into the senses.  This was a trick of the Ancient Greeks and Romans, who would talk about a journey they would take on foot frequently.  You have a detailed memory of such a journey and can position the items you’re memorizing at specific places along the path to help you remember simply by playing back the journey in your mind’s eye.

The understanding we seek about applications versus browsing is tied to these sorts of mental constructs.  Browsing is essentially an act of navigation, and navigation is something that got baked in as a basic task our minds are well constructed to grasp long ago.  The more the metaphor can fit the idea of going to a place, the more comfortable it is.  Hence URL’s are addresses and we can bookmark places to return to.  We “search” for the right places to browse.  It all hangs together very very well.

Yet navigation is not the only such hardwire capacity our minds have available.  Whether we’re flaking obsidian to make spearheads for hunting Mastodons or polishing up a PowerPoint for hunting Venture Capital (it’s a pretty scary process up until you succeed either way!), we are making something.  Making things requires manipulation.  It is an act of manual dexterity, at least when we think of which part of our brains are wired to deal with it.  As you use editors and especially things like drawing programs, it is surprising how much these acts of manipulation come into the picture.  We cut and paste.  We borrow tools from tool palettes that have to be picked up and carried over to the work.  We even scrub away physically at the work with various kinds of these tools.  It really isn’t about navigating our way along a journey, it’s about transforming some sort of raw material (a file, an image, a blank canvas) into something else of (hopefully) higher value.  The more the software captures this manipulative character of the task, the more naturally we just snap into the model and start using it.

I commented on Bill’s post that while I would be responding (and I owe a response to the rest of the post), I suspected we would wind up agreeing in various peculiar ways.  This is the first such.  Bill is right that apps are not going to take over from browsing, but I am also right in that all user Experience should not be transformed into browsing.  You have to pick the model that fits best.  It may be, BTW, that Flex is best at manipulative or non-browsing tasks.  This may be why when a web site gets too “over the top” with Flash, it’s not a happy thing.  It just feels like too weird an experience.  You don’t need Flex to deliver the browsing experience (though it can), because HTML is good enough.  I’m fine with that, but HTML is not so hot at all with the manipulative app experience.  It takes the mountain of hacks we call AJAX to even begin to get there, and it is often not a very happy journey.  More on our other points of contention in a future post.

Meanwhile, I’ll leave my last example, Social Media and Relationships as an exercise for the reader.  Surely, relationships among people are another area that is strongly hardwired into our “mindware” since very early times.  It has to be tied up in the very creation of speech itself.  Lots of abstract thinking there as well.  And in fact, Social Software is not very much like either browsing (navigation) or apps (manipulation).  It’s another category, and a very interesting and fairly recent one.  I would say we still have a lot to learn about how to make it feel completely natural, but at the same time, it’s come a long ways and feels pretty good.

What other deep patterns of our minds are out there waiting to be exploited for new kinds of User Experience?  Augmented Reality as the act of seeing by scanning our environment?  How about hunting and gathering?  There has to be quite a lot of untapped potential yet to come!

One response to “Browsers for Navigation, Apps for Manipulation, Social Media for Relationships”