Who is to blame for IT project failures? My colleague, Michael Krigsman, argues that when IT projects wander into the “IT Devils Triangle,” all three participants–the vendor, the integrator, and the customer–are to blame. Michael is very insistent about this; in a recent post on Marin County v. Deloitte, he says, “In my view, it is highly unusual for a project to fail without some culpability on the part of the customer.”

Michael is the guy who almost singlehandedly took IT project failure out of the closet and into the open, and much of his professional life is spent analyzing these failures. For that reason, one should not criticize what he says without good reason. But I’ve always been uncomfortable with his line on things and felt that we would all be better off if we had better analytic tools for this kind of situation. I want to know when the “culpability” is minor and merely contributory and when it is really important or even primary.

One’s normal intuition about such things is that there are broad spheres of responsibility. If I get an artificial hip implanted, it’s up to the manufacturer to provide my doctor with a hip that works, up to the doctor to put it in correctly, and up to me not to abuse it. This is the intuition that underlies a lot of contract law and liability law, and it even applies to very large, complex engineering projects. When the architect found a flaw with the Citicorp building in New York City, which flaw could have caused it to collapse, the architect and the contractor took responsibility for it and had it fixed. They didn’t blame the customer, and they didn’t ask the customer to adjust his use of the building.

If you apply this intuition to technology, it works pretty well. In the case of IT projects, the software company is responsible for making sure that the design and building of the product is adequate to the demands that will be placed on it, the integrator is responsible for deploying the product in a way that meets what one might call the normal expectations of the customer, and the customer is responsible for using it in ways that are consistent with the design. If any of them fail to meet their responsibilities in their sphere, then they are culpable. And the others are not culpable (except perhaps in a minor way) if they don’t wish to compensate for that failure.

Now, I think Michael would agree with this, but he would say that, as a practical matter, what happens in these large project failures. is that all three people fail to deliver, so all are culpable. (Michael, please correct me if I’m wrong.)

But it seems to me that doesn’t go far enough. I think you need to be able to figure out when one participant is clearly morst culpable? Perhaps, for instance, one ought to apply a notion of priority, so that if the vendor fails to deliver, the vendor is primarily culpable by definition, and the most that the next two parties can do is provide some minor contribution. (This tends to be the approach in products liability, with some major caveats.) Or perhaps there are some other tools that need to be applied, tools that would allow one to extend (or perhaps even change) the “pox on all their houses,” line that Michael takes.

Whatever you do, though, it isn’t easy. 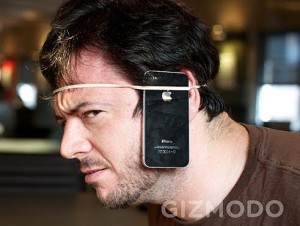 Let me try to illustrate what I mean with an example that has made a lot of news recently: the iPhone 4. Here you had three participants: Apple, AT&T, and the customer. You had a product that “did not work properly.” And you have a dispute about levels of culpability.

The problem, in case you’ve been in Tibet for the last month, is that the iPhone’s reception isn’t very good for reasons that still aren’t clear. (My wife has one. It’s true; it’s not not good.) The customers have basically been told by Apple, “The problem is in the way you hold the phone. Either hold the phone differently, or fork over $25 for a case.” The customers have said, if I may paraphrase, “It’s a phone. You should be able to hold the phone any way you want. It’s up to Apple to give me a phone that works no matter how I hold it.”

Now, the IT Devil’s Triangle analysis says, basically, that the customers are wrong. According to this argument, Apple made a good phone that made some design tradeoffs. (Basically, the antenna was put on the rim of the phone.) If one of those tradeoffs means they have to hold the phone in a special way, so what? They should either buy themselves a case or hold the phone correctly. If they don’t want to do that or can’t, they are contributing to the problem and are at least as culpable as Apple.

So is AT&T off the hook, here? Under the Devil’s Triangle argument, not at all. The phone service that they provide is weak and erratic, and that makes it very difficult to troubleshoot the phone. (I have experienced this in spades.) Their customer “service” is designed to handle normal problems expeditiously, but is not designed to track and resolve complex problems, and as a result, it makes what could be an irksome experience into something verging on horrible. (I have also experienced this, believe me.) And that means that customers are not as tolerant of the iPhone 4′s design choices as they should be.

It’s something of a conundrum, isn’t it? One’s normal intuition is that Apple should design a phone that people can hold any way they want. But one can certainly make a cogent argument that it’s really the customer, as much as anyone else, who is to blame, because they get mad at Apple, rather than being willing to hold the phone in the correct way.

In the end, the solution to this riddle is a matter of values. If you think (as Consumer Reports does) that it’s up to the vendor to get things right, when it comes to simple things like how one holds the phone, then the Devil’s Triangle argument is simply wrong. If you think (as Steve Jobs and many of my friends who work for vendors think) that the customer is to blame if they can’t deal with the “flaws” that they find in a complex and highly-engineered technology, then you’re going to agree with Michael and assume that there are very few situations where the customer doesn’t have some culpability.

Let me just tell you where I come down on this and hope for some illuminating comments. I think the benefit of the doubt should be given to the user. If the vendor is clear about the design tradeoffs and limitations and the deliverer (integrator) provides service that takes those limitations adequately into account and is clear about that, then I think, “Yes, it’s up to the consumer to deal with the limitations.” If the vendor and deliverer fail to do this–if the vendor isn’t clear about what the design tradeoffs are or if the vendor and deliverer allow you to get the idea that the product will do things (like make phone calls in normal situations when being held normally) that it won’t in fact do–then the onus is on them.

So, for instance, if the building architect makes a mistake in the way the building was designed or the general contractor deviates from the design in a way that turns out to be dangerous, it’s up to them to fix it; the building owners are not culpable because they don’t want to limit the number of people allowed on each floor to a number far below what they’d been led to expect. And if the hip designer uses a brittle material and the doctor chips it when he or she installs it, it’s not up to the patient to walk less.

So why is this important? It’s important because this is not how the software industry works. It’s normal for vendors to be very close about the design of their technology, for vendor and integrator salespeople to make unrealistic claims about what the technology does or about the benefits to be received, for the people delivering the product to view limitations in delivery as upsell opportunities, etc., etc. So if my view were to prevail, and it were up to the vendor and deliverer to make sure that the product works as you would normally expect and the installation is what it should be, the industry would have to change.

Is that likely? Maybe, maybe not. But it gets more and more likely every time a user asked to adapt to some software’s vagaries asks himself or herself, “Isn’t this like being asked to hold an iPhone with tweezers?”