Chutzpah of the Week: Monty Widenius 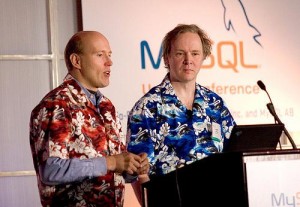 According to Wikipedia, chutzpah is “the quality of audacity, for good or for bad”. The award for “chutzpah of the week” has a clear winner, and it’s only Monday!

The winner is Monty Widenius. Here’s a guy who was significantly responsible for mySQL, but so were several others, not to mention the thousands of other contributors. He became very wealthy selling this work product to Sun, which would kind-a mean it’s not his anymore. But here he comes back, claiming to speak for the mySQL community, with nary a mention of his personal financial stake in wresting control of mySQL away from its legal owners to whom he sold it!

He’s now claiming that mySQL was always targeted at Oracle as its main “enemy,” a statement that never appeared in mySQL corporate documents, in their documents in the sale to Sun, or in Sun’s internal sales materials (to the best of my knowledge). According to this article (cited above and below), he said “[t]he largest and the most common rival was Oracle. In every deal we were competing against Oracle.”From what I hear , that is a complete falsehood, and blowing out a statement like that is another example if his chutzpah. After all, mySQL competed with Oracle in a tiny fraction of Oracle’s deals. Most use of mySQL came about by developers downloading it to get a free database (or a database optimized for horizontal scalability), and those same developers would have downloaded some other free database (e.g., PostgreSQL or Ingres) if mySQL did not exist.

Now, Monty has a new company that stands to retake control of mySQL and its community, if that control can be wrested away from its rightful owners by a clever combination of overzealous European regulators and manipulation of a gullible (or worse) press. And, lo and behold, here’s a press release from Monty: “MYSQL FOUNDER OUTLINES SOLUTION: INSTEAD OF LETTING SUN SUFFER, ORACLE SHOULD SELL MYSQL.” No doubt, the “suitable third party” he refers to in the blog/press release is Monty Program Ab. Chutzpah again.

So, why does the industry press lionize Monty? After all, he’s a sell-out (literally!), who benefited financially from the work of many who worked for nothing (the mySQL community contributors), and who is trying to do so again. I guess chutzpah gets rewarded.