Cog and Gen getting it on? Naaaahhhhh 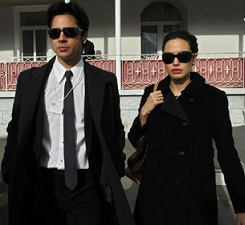 Lots of frantic noise this week that Cog has been making romantic overtones to Genpact – with India’s press jumping on “speculation“.

Like any other industry observer, you can certainly see lots of romantic potential here – Wall Street’s darlings of BPO and ADM tying the knot to frighten the life out of Accenture, IBM, Infosys  et al. However, while its seems like Brad and Angie Part II, I’m afraid this one just ain’t gonna happen anytime soon.  And if it does, I will personally send a box of chocolates to Senator Schumer.

Here’s why this is highly unlikely:

Industry media is bored and yearns for big M&A across the new breed of services providers, but they’re not (quite) ready.  Everyone’s been predicting major M&A for the last couple of years, but it’s only really happening in very mature industries (for example payroll and benefits administration) or with companies that have been around for many years and need to be acquired to have them broken up and re-balanced (i.e. Perot Systems, EDS etc.).  Firms such as Cognizant and Genpact have been on such a high growth trajectory these past 3-4 years, they’re simply not ready to drive such a thunderbolt of dusruption into their business.  We’ll need to observe a significant slowdown of growth for an least two consecutive quarters, before mergers of this magnitude will be entertained.

Both Genpact and Cognizant have been developing their own unique cultures and brands – merging them now is risky. The speed of development of these firms has been staggering, and much of the energy behind this, has been the unique cultures created by dynamic leadership of taking the offshore model to the global enterprise.  The management style required to lead a  BPO business is also different from ITO – the margins are often tighter, the skills needed to run certain processes often harder to attract, develop, train and cross-train.  Taking a unique BPO culture and trying to shoe-horn it into a dynamic ITO culture could very quickly derail a secret sauce that took years to develop.

General Electric is an unlikely proposition for Cognizant to take-on. GE still dominates 40% of Genpact’s business (see earlier post), and Cognizant is unlikely to see major growth potential in this client.  It also has a reputation for being a tough one to ingest.

The Indian-centric providers are more focused on cash-based “tuck-in” acquisitions. For several years, the leading Indian-centric providers have been looking at acquisitions that tend to be largely cash-based, relatively inexpensive, and ones they can pick up and grow with their scale-model.  For example, InfosysBPO recently acquired the McCamish insurance platform, whereby it could look to turn $1m insurance clients into $50m clients with its BPO scale.  Cognizant picked up the UBS Indian captive where it could start to develop BPO/KPO client opportunities based on the niche capabilities it had acquired.  Genpact is frequently picking up niche deals that adds piecemeal process competencies.   If these firms wanted to buy big, they’d need to entertain stock-based acquisitions, as once they shell out a few hundred million of their cash on one or two larger acquisitions, that money’s gone, and so does their room for future strategic investments.

The more likely M&A will be between a Cowboy and and Indian. As discussed here recently, the more likely M&A in the ITO/BPO industry will come from Western providers and Indian providers coming together, in order to benefit from each other’s competencies and cultures.  And this could take many shapes or forms – there is no set way for providers to develop their solutions with the onset of Cloud computing, hybrid sourcing models and verticalization of IT/BPO solutions. Genpact is a highly attractive proposition for many Western firms seeking to take a market leadership position in BPO.  And who would discount one company from Redwood shores with the reputation of making bold acquisitive moves, in casting its greedy eyes at the subcontinent?