Year on year sales growth for Notebooks have entered negative territory for the first time ever: 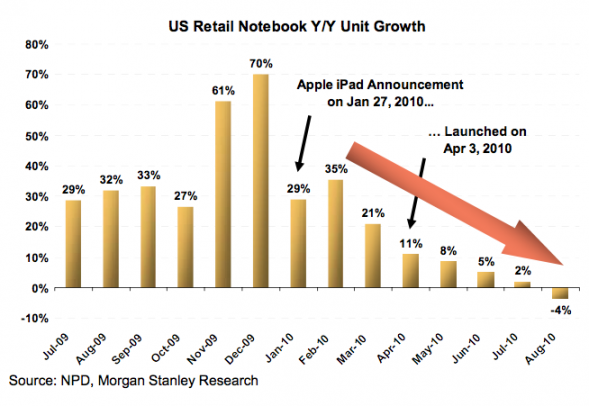 It was already underway before the iPad was launched, but I’m sure the iPad hasn’t helped.  Looks to me like the whole thing is a victim of this massive recession we’re still finding ourselves in.  And the truth is, there are more things to spend our money on.

These are retail notebook sales, so presumably they reflect consumer and perhaps small business more than business in general, which is also telling.  I suspect there aren’t too many large enterprises financing iPad purchases yet.  Best Buy’s CEO is being widely quoted as saying their internal numbers show iPad is cutting into sales by up to 50%.  Let’s not forget the Kindle either.  Love the new Kindle vs iPad videos, they’re funny.

Here is the essential buyer decision:

–  Times are tough, money is tight.

–  Do you really want to upgrade the notebook you probably already own?

–  Or, would you rather soldier on with that notebook at least another year and get the new hotness in town, an iPad?

Seems like not much of a decision to me.  I have always been more of a desktop guy, and I get more that way as I get older.  The reason is power and a big display.  I’m running some pretty hefty tools for things like CNC machine work (CAD/CAM).  Very graphics intensive.  And I want a lot of pixels and the computing grunt to move them around fast.  So I like my desktop, especially since it was upgraded not that long ago with a new Mobo, latest multicore cpu, graphics, and solid state disk (boots in about 12 seconds).

I guess if there is good news, it is that I suspect people are soldiering on and not just discarding notebooks in favor of iPads.  At some point, they will want to upgrade, but not until they have their ‘pad (whichever brand it may be).

I have a laptop too.  It’s more like 3 years old and is squarely in the category of “good enough”  and not “great”.  And I have an iPad.  One thing I noticed is that while I can’t replace the notebook with the iPad, I sure can use it in place of the notebook pretty often.  There are certain times when I am going to a meeting and I know I want to run software that won’t run on the iPad.  That happens pretty seldom, and hopefully even less seldom now that I can run some Flash on iPad.

The primary thing the iPad isn’t very good at (so not very good my barely good enough notebook has it beat) is content creation.  Whether for lack of the apps, the touch keyboard, the screen form factor, or whatever, it just doesn’t work for content creation.  I’ve tried it, and no joy.  But, how often do I need mobile content creation?  It turns out, not very often.  Unless I’m travelling (where I take the notebook in my checked luggage and carry on the iPad), I don’t need it at all.

Interesting to think about what it would take for the iPad to become a really slick content creation device.  I’m envisioning a clamshell carrying case with integrated keyboard.  I have Apple’s keyboard, and it is very flawed.  For starters, it wants to run in portrait instead of landscape mode.  You can get around that with a cable, but then the shape is awkward for compact carrying.  I want a keyboard like Apple’s, built into a clamshell.  Open the clamshell and you can set up the iPad in an easel-like configuration with landscape screen view.  The keyboard should fold down.  Make it easy to snap the iPad in and out, because I view this case as being a some time thing for when I need to travel and create content.  Add the right content creation software (not convinced they are there yet, BTW), and it would be quite a handy gadget.

Of course that’s all add-on BS.  The ultimate killer notebook would look like a regular notebook except that the screen would pop off to become a ‘pad.  Imagine if Apple built one of those.  Now that would be the new hotness!

One response to “The Notebook Sales Crash”