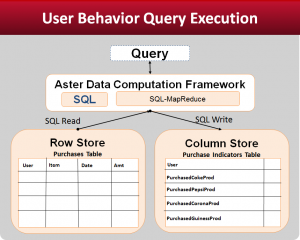 Aster Data has announced its new version, nCluster 4.6, which now includes a column data store, staking a claim as the first ADBMS to combine SQL and MapReduce on a hybrid row and column MPP system. While its R&D has hitherto been focused on enabling advanced in-database analytic processing in its flagship “Data-Analytics Server, ” Aster has clearly had other irons in the fire. CTO Tasso Argyros tells me that the new column store is entirely new, written from scratch to ensure that Aster’s SQL-MR is a universal programming layer atop storage, and that its 1000+ MapReduce-ready analytic functions (and UDFs) will run on both row- and column-based data.

Choice of storage, which in this release can be implemented per table or per partition, provides customers flexible performance optimization based on the nature of their expected analytical workloads, as determined by the new Data Model Express tool Aster provides that assesses sample queries against the data. The rules-based recommendation engine can be re-run as the mix changes.   Continue reading…