What’s the key difference between SaaS VS On Premise. According to Larry Ellison, with SaaS – everything is designed around the plan that everything related to software needs to be managed by business whereas in an on-premise model, technical teams have the charter to initiate, manage the applications both on premise ranging from data center management to app management. With this in mind, if we ask what is Fusion upto? The Answer : With Fusion, all interfaces shall be used by business teams. Larry first brought out two definitions of cloud computing:
1. Virtualized cloud computing infrastructure services, as offered by Amazon.com’s Elastic Cloud Computing services, and
2. Software applications that are offered as a service over the Internet, as typified by Salesforce.com.
Oracle’s view of cloud computing seems to match that of Amazon.com and not Salesforce.com’s.
This note follows Larry Ellison’s sunday night keynote address and should be read along this earlier note 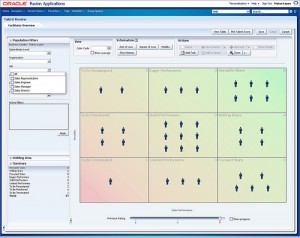 As I watched the live webcast of the Keynote tonight at the Oracle Openworld 2010, Larry finally announced the launch of Fusion Apps. He recalled the major acquisitions that Oracle made starting with PeopleSoft, Siebel, J.D.Edwards etc and how this forced Oracle’s hand to come with a homogenized service enabled enterprise system. Well , tonight a beaming Larry announces the limited customer launch of Fusion apps – a culmination of 5+ years of effort and Larry called this a monumental effort resulting in the announcement of launch of 100+ fusion app modules. Some customer may begin trying the product from the the fourth quarter of this year while the general availability to public is expected to be first quarter of 2011. What are Fusion Application design principles? BI driven, Standards-based, Modern, Service Oriented. and SaaS ready. Process automation is no more the focus of today’s enterprise system but business intelligence driven apps are the focus of enterprise systems – this is the progression dictated by current needs of business and achievable given the maturity of technology.

In making these launch announcements, Larry pointed out that Fusion apps are being built on the same middleware that oracle sells to customers and confirmed that Fusion apps runs on top of Fusion middleware , Oracle claims that with Fusion apps, it becomes easy for customers to take oracle apps and integrate with SAP . The promise here : No rip and replace involved. This is made entirely possible as the whole app stack is said to have been using standard SOA models. The additional announcement was that the interfaces would look lot like Facebook ,very different look from ebusiness suite. Larry said that social features , activity streams and collaboration are built-in as integral to the fusion apps modules.
One of the key announcements that I was waiting to hear about was regarding the mode of availability : The answer – Al l fusion apps are available both on-premise or over the cloud and Larry claimed that no one else has done this) . Larry contrasted this with SAP experience : SAP business by design cant run in an on premise mode while traditional SAP modules are not yet cloud/SaaS enabled. The highlight here : since Fusion Apps can support multiple delivery models, Oracle claims that intermobility across clouds is assured and easy movement across clouds remain enabled. One can start with on-premise models and move it to private clouds onto hybrid and public clouds. I was not sure from the announcement about three things:
A. If the Public cloud support that Oracle announced related to Fusion Apps is a private cloud managed by Oracle accessible in a public way or if it meant support across public service providers.

B. What about multitenancy? Is it supported in the Fusion Apps architecture?

C. Would all standard databases get supported – in this vertically integrated model would the stack be optimized just to support Oracle products

Oracle pointed to the fact that the current ERP system s use 25 years old technology and even products like Salesforce.com, Taleo are also relatively old ( say 10 years or so!)
Now, back to Fusion Apps . The first set of apps encompass 7 big modules of fusion apps – Financial Management, HCM, Sales and Marketing, Project Portfolio management, SCM, PROCUREMENT & GRC . A good spread so to say, Oracle claims that these modules have within themselves, 5000 TABLES, 20000 VIEW OBJECTS, 10000 BUSINESS PROCESSES , 2500 APP MODULES – no doubt a mammoth effort. Oracle showed a teaser demo – there’s another session later in the event that will get a full blown view of Fusion Apps. Fusion Apps demo showed good clean UI with modern look and feel with lots of embedded activity stream.

Apparently , these modules were simultaneously tested with select customers while getting developed and Oracle says extensive efforts went behind optimizing the screens, workflows and functionalities. The key thing here is that the Fusion Apps platform leverages standard middleware and oracle says no proprietary language is involved. By using Java as the development standard, Oracle seems to have pushed the platform become lot more easy to adopt and Oracle highlighted that competition ranging from SAP to Salesforce.com insists on using proprietary languages to develop on their respective platforms. Such a middleware support makes it possible to connect easily with SAP and any other enterprise system and the emphasis here is that the ease come from the fact that everything is web service enabled

All these confirm the fact that Oracle is one of the few vendors to completely rebuild its apps, BI, and middleware from scratch though their stand on multitenancy is not clear as of today. It’s a major step forward to see that all models of cloud – Public, private, hybrid, on premise are fully supported with facilitated help to move easily across these clouds.

Hopefully more details about the products would be available in the Fusion Apps exclusive session later this week.

What’s the adoption strategy? Oracle recommends its customers to continue on your current path and they are very clearly not asking all customers to migrate to Fusion immediately. In fact Oracle did not appear to be aggressive in nudging its customers to move into this platform at the earliest. Oracle further advises that enterprises wanting to explore Fusion need to adopt a co-existence strategy ( EXPECTING 50-100 CUSTOMERS EARLY NEXT YEAR) Larry is cautious and says not all need to move into fusion apps immediately but plan moving into Fusion Apps over time. Oracle confirms on support for current ebiz suite will continue to be supported for a long time. New modules like talent management in fusion( not available in on-premise) is an ideal way to start using Fusion Apps.

Exalogic – Cloud In A Box : Another important thing that came out today is the fact that Oracle is working really hard to integrate its software and hardware capabilities. Earlier with Exadata, Oracle integrated its database prowess with hardware prowess. Now Exalogic joins Exadata in Oracle’s appliance family – here Oracle is integrating its hardware with application server. Whats the objective here? With Exalogic, Oracle claims that its customers can build Amazon-like and Amazon-scale (almost) datacenter infrastructure. Exalogic is targeted at customers that are looking to deploy Java applications (custom or packaged) in large scale.Exalogic Elastic Cloud packages server, storage, network, virtual machine, operating system and application middleware in one box, which provides an environment for building and running Java applications. Exalogic touts good support for virtualization and elasticity. Exalogic is designed to work together with Exadata Database Machine. Some of the numbers that Oracle showcased were mightily impressive : Exalogic is capable of performing at 1 million HTTP requests per second and comes at a very attractive $1.075mn. Oracel claims that this is a quarter of the cost for comparable IBM machines. Exalogic customers will be running a consistent configuration, which significantly reduces pain in testing, configuration and maintenance – another significant source of cost savings for customers, while achieving order of magnitude results.