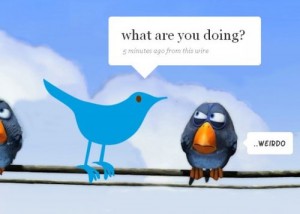 So here I am, 5 days after the big announcement, and still no new Twitter UI.  We just finished a weekend, which would seem to me like a logical time to roll it out to the remainder of the audience.  No joy.  WTF, over?

Is Twitter not multitenant, or what?  I sure they look with disdain at hearing that term usually reserved for business SaaS software, but I mean really, what’s up with this, guys?  Did you not get the memo about keeping all users on the same code line?  Did we forget to Tweet that somewhere along the line so you never read it?  Is your architecture so fragile that you can’t afford to let everyone have the new UI at once?  WTF is up with this?

I don’t know what’s up with me on this.  I mean, some guys who “get it” are all “Meh” about it, while others think it’s a whole friggin’ platform.  Basically, Twitter needs to be a richer medium for me to like it better, so it sounds cool to me and I want to see it. .

OK, I can see the advisability of not rolling it out to everyone in one fell swoop.  I’m trying to calm down, and sure, I’ve written about release feathering myself.  That’s kewl and all, but how long is this going to take and why isn’t there more transparency into when I as a user can expect to get the UI?  You know, like there must be an algorithm or some such.  If my handle starts with an “A” I get to go first, unless I’m a Tech Crunch reporter with the handle “Zelda” in which case I get to go first too.  Hey, at least I could figure out what to expect.  Or maybe you could even make my expected upgrade date accessible to me in the UI somewhere.

Here is the thing.  If you are going to make the biggest update ever.  If you’re going to have PR about it and all.  You’ve got to have more transparency and a shorter release feathering cycle so people know what to expect and can get access sooner.  I mean Google is much bigger and managed to get the Priority Inbox to me a lot sooner.  After all, you’re pissing off guys like Anil giving it to his wife before him and all.  Anil is right by the way in that post about it being a platform that doesn’t act like Switzerland (if you want to call that pane a platform).  But Twitter has been acting more and more walled garden-ish all the time.

Do you know what I mean?

One response to “Is Twitter Not Multitenant or What?”