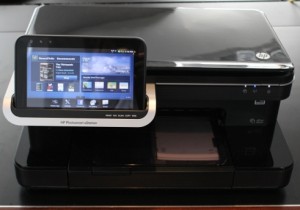 What a fabulous idea:  spend $399 for a pad and get a free printer!

That’s the idea behind HP’s Photosmart eStation printer, and I love it.  In fact, we need more thinking like this.

Why continue to offer difficult hardware pushbutton UI on so many devices when a pad interface lets you offer a much richer User Experience?  Can you imagine if every hard push button UI were replaced by a really slick webby UI accessed via one of these pads?  Forget the microwave, which suddenly won’t need to blink its clock, what about the really hard stuff like:

–  Heck programming a printer.  I still remember the horror of getting our Helpstream office laser printer to scan and send a Fax.  Brutal!

–  Programming a complete home entertainment system so it really all works together well as an integrated system.

There are only two things not to like, and they point to the same conclusion.  First the two things:

1.  I don’t need a new pad with every device.  That’s a lot of pads!  Imagine how cheap that HP printer would be without a pad.

2.  I want my pads to talk to every device.  Ideally, I want to be able to drop a pad into any device’s cradle for charging too.  No more nest of wall warts!

That conclusion I mentioned is that we could use some standards.  There needs to be a “pad UI RESTful interface API” that works for any pad-loving device.  Probably a chip or two that makes it all easy and automatic.  Memo to chip guys, can we have every pad supporting device be a WiFi hotspot while we’re at it?  Can they relay to each other to extend coverage or what?

I tell you, as I tote my iPad and iPhone around, it would be so cool if they could interact more with the fabric of my existence.  Sure it gets a little creepy sometimes, but I can get over that.  Wouldn’t it be great to have maybe one pad per room, and the ability to control any appliance in the room, plus the room’s lighting from any pad in the house?

Whoa.  That would be a very cool idea.  Who will Open Source the first version?  Google, you wanna sell ads on my washing machine?  Build this pad stuff and get it out as Open Source.  I’m all for it.  You know you want to!