Creating a new business: The old way or the smart way

@jobsworth tweeted the other day “Whenever I hear talk about business models, I am reminded of Peter Drucker’s wonderful cautionary words: People make shoes, not money”

I would venture that it’s because the term “Business Model” today is mostly understood as “how to get paid”.

I tweeted back “”Business Model” is mostly misused, re-read it as “Model of the Business” (as in value creation activities) and voila, useful.”

An excellent example on how widely understood terms hampers our thinking.

But terms are not alone in hampering, important concepts, practices and tools that we use – like double-entry book keeping and ubiquitous Enterprise Software – are even worse.

When I was a kid I had a model train set, the “Märklin” HO gauge, all nicely mounted on a huge chipboard. Of course it had houses too, all in the Alpine style befitting the painted paper maché mountains that I had built.

“Faller” was the brand that delivered the houses in HO scale. They came in little cardboard boxes and had to be assembled with glue and all.

The result was spectacular, a vista where one easily could imagine oneself a part of.

But once built not much one could do but chug along while drawing the curtains and lightening the street lights for imaginary changes from day to night.

Enjoyable as it was, innovation was not invited, unless I was willing to rip up tracks, rewire streets and shelve some houses while building some new.

Now imagine “Lego”, no doubt somewhat less perfect to look at with it’s inevitable angled features. But what innovation possibilities there were! 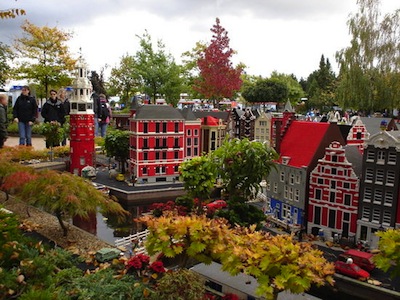 Even simple bricks can make a nice whole…
(Image thanks to Sarahindenmark and TravelPod.)

A block was a block, but it could be combined with other blocks in ways only limited by my fantasy.

Now transpose that thought onto your company, and a day of strategy talks:

The bits and pieces you have are seldom atomised, you’re in the Airline business or in the Hospital business. Then you have the “best practices” ERP, SCM, HCM and whatnot systems already installed.

Differentiating yourself from your competitors, given the infrastructure and the business definition, is very limited. Branding as in colour schemes, logos and handouts seems to be an often chosen path of action. You’re in a “Faller” situation.

Now think “Lego”, starting with an atomised view of reality (in fact the data model of the reality that your business is in):

First look for the Core Value Delivery as objects that needs manipulation (tangible or intangible does not matter):

That would lead to other objects that you need:

Then you can go about combining these objects of reality representation, tangible or not does not matter.

First thing that will happen is that you’ll find some assumptions already baked into some of the objects, now rip those apart for the fun of it:

Then why “planes”? Is that the only way to transport?

And now the “strategy builders” will have a field day, build and test (first totally theoretical using your calculator to look for pieces of the value creation that one could keep, aka profit).

If some of the “Lego” houses looks promising, then time to make a real life stab at it.

Now the big problem will hit you, your nice and shiny “Best Practices” Enterprise Software is not built for such frivolities, “Best Practices” means that, what has been done before and that works as such.

To quote Larry Ellison from Oracle Open World the other day talking about their new Fusion application suite: “There are some 10,000 unique business processes in the suite, and 100 different products will be available simultaneously at the general release.”

That’s a lot of prebuilt “Faller” houses, surely enough to enable somewhat different businesses for different users, but still you’re stuck with Mr Ellison’s view of the world. The existing world of business processes that is.

[WARNING: Words alluding to our own technology might ensue. So if you’ll have none of that, stop reading now and please accept my apologies for leading you this far :)]

But were you to strike out on your own, differentiating yourself and even innovate in business models; what you’re in need of now is a piece of Enterprise Software that models reality like you did in above Strategy session. Like “Lego”.

And do you really have a choice? Can you really compete without being different? Yes you can follow best practices and use Mr Ellison’s world view, but then you have to get up earlier in the morning, your time being your only competitive parameter after you left the creative part to Oracle or it’s many brethren.

Nope, the “Lego” model is better I would argue.

That is exactly what we set out to with Thingamy, and what it now does, it is the “Lego” set for business strategies and subsequent implementation. No wonder that we see increasing interest from startups, both virgin firms and new “projects” within established firms.

Instead of focus on individual efficiency (or general efficiency as per “best practices”) we focus on organisational effectiveness and strategic freedom.

Leaning on Mr Ellison’s and his brethren’s world view and vast experience in the existing feels safe, but be aware that the safeness of the crowd also means risk of being trampled. Good for the established mastodons, bad for the new and smaller.

One response to “Creating a new business: The old way or the smart way”