My Cousin Joey, The Last Of The Borscht Belt Comics

On my stepmother’s side of the family (my stepmother was a first cousin of my birth mother, who died when I was 5+, so things were a little complicated), we were related to The Three Stooges, but I never got to spend time with them.  However, on the Bloom side of my family, we were not only related to but very much connected to my cousin Joey Russell, the last of the Borscht Belt comedians.  Never a top banana according to Variety, perhaps because he put family first and refused to be away from home for very long, Joey was always the top banana in my book.
Joey passed away at 90+ yesterday, 9/25/10, after a life filled with family, laughter and philanthropy.  He wasn’t just a funny man, he was a Jewish comedian, and they don’t come any funnier or more talented.  Of course, Joey Russell wasn’t his real name, but then who knows how we got Bloom when passing through Ellis Island.  When I was in high school, I visited the National Archives with my Dad, going through reels and reels of microfilm looking for the records of his mother’s, my Bubbi Bloom’s, arrival (and just wait until I blog her story!).  Not speaking any English, not understanding the procedures, the immigrants were confronted with less than patient bureaucrats who frequently assigned a name they could pronounce and spell regardless of what your given name had been.
Joey was larger than life, always keeping us laughing, using family in his schtick.  But he was also an amazing family man and philanthopist, throwing the weight of his oversized personality into everything he did.  I am so proud of him and wanted to share a little of his story with you in memorium.  I’d like to think that there’s a little of that comedic KSAOC in my own DNA, but that’s for others to decide.   What follows is from the New Haven Register, as written: 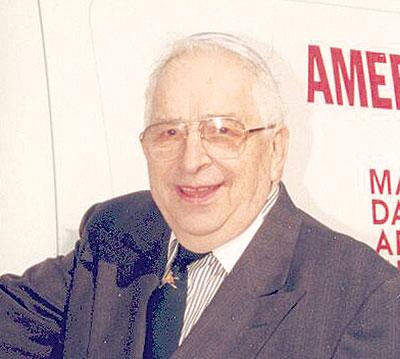 ORANGE — Did you hear the one about the entrepreneur, humanitarian and philanthropist whose synagogue is throwing him a huge 90th birthday party June 20?

Probably not, because he’s best known publicly as a professional stand-up comedian and as his one-time TV character, “Happy the Clown.”

Plus, he’s too clever to start a joke like that.

Milford resident Joey Russell, a nightclub comic who worked with comedy legends such as Alan King, Joey Bishop and Henny Youngman; had a run at the famed Copa Cabana and for years was a Borscht Belt funnyman, is being honored at Or Shalom.  Tickets are selling fast, his son, Carl, said, because his dad has touched countless lives.

There’s no debating whether the elder Russell is funny — even today, the jokes roll easily — but there’s also a side that couldn’t get more serious.

Russell established a local chapter of American Red Magen David for Israel (ARMDI), the Israeli equivalent of the American Red Cross, and raised money for some 20 ambulances.  He’s led more than 50 tours to the Holy Land, has sold hundreds of thousands worth of Israeli bonds and touched the lives of countless children and adults.  In 1996, Joey Russell was named Volunteer of the Year for ARMDI.

“The thing that was most intriguing was his ability to reach young people,” Vine said, recalling how when talking to a group of youngsters one girl suggested collecting a penny for every Jew lost in the Holocaust.  Six million pennies was $60,000, the approximate cost of one ambulance, so Russell ran with the idea to create the Penny Parade Fund and the coins poured in — pennies, dimes, quarters, then paper bills and checks.

“He always puts himself out there. He always asks, ‘Can I help with this or that?”Vine said.

Vine said every year after the Jewish holidays, Russell would go to ShopRite and buy out all the kosher food at a discount, then deliver it to Jewish Family Services to be distributed among those struggling financially.

And Vine said even though his friend knows every joke ever told, he’s always listen to someone else tell a joke because “he enjoys the fact that you’re telling the joke.”

Or Shalom’s administrator, Jody Dietch, said although Russell didn’t know her son, Howie, he got the nervous young man through his bar mitzvah service by whispering jokes in his ear, including, “There’s another hundred dollars,” each time a new guest walked in.

“Joey has touched so many people from so many walks of life,” said Or Shalom’s spiritual leader, Rabbi Alvin Wainhaus.

Russell was one of 11 children born to an Orthodox Jewish family in Springfield, Mass. who left school early in order to help support his family.

His father, a rabbi, sold fruit and vegetables on the side.

When he was 15, Russell performed with his older brothers at a local club called the Emory Cafe.  His brothers played music and he sang songs and did humorous imitations of FDR and Alf Landon.

“A man called me over and said, ‘Come see me at my place, the Wonder Bar. You’ll work for me,’” Russell has said. “I worked there about five weeks, singing and doing lousy jokes. “

He married his wife, Josi, in 1944, and the two set out for Florida to find success on the resort circuit.  There were many performance opportunities Russell turned down through the years to stay close to home where he and Josi raised five children, all creative, educated and successful.  In his later years, Russell perfected an ethnic act, geared to older, Jewish audiences.  He did jokes, reflected on life and gave humorous lectures on Jewish superstitions and basic Yiddish.

Along the way, Russell met a professional clown, “Pop Lolly, the Lollipop King,” who would pass out candy to the kids.  Josi made her husband a clown suit, he learned to make balloon animals and made the rounds at movie theaters on Saturday afternoons.  Josi Russell is part owner of Costume Bazaar, which is currently for sale.

Before long, he became Happy the Clown, kids’ TV star on Channel 8.

Russell wore a white face, red nose, crumpled hat and red and white striped pants and one of his gimmicks that caught on were two wooden sticks he banged together and called, “happy sticks.”  Joey Russell has said the TV station paid him $250 a week and added, “I never knew this kind of money in my life.”

Russell also visited local hospitals and once raced to the Hospital of Saint Raphael in clown costume when Josi was in labor.

“I asked the sisters, ‘Could you possibly take the crucifix off the wall in my wife’s room?’  They said, ‘Happy, does it offend you?’  I said, ‘No, but it doesn’t seem right to have two Jews in the same room suffering so much,’” Russell remembers.

Carl Russell said people still come up to him and sing his father’s happy sticks song.

“His DNA is his clever, creative and funny,” Carl Russell said. “He’s touched lives in many dimensions.  He’s just been a charismatic, wonderful, philanthrapist to so many people in the Greater New Haven area.”

As for Russell’s TV career, he stayed on the air in New Haven for 88 weeks, then moved to Channel 30.  He changed his character’s name to Colonel Clown and remained on Connecticut TV until 1982.

It was in 1958, when Truman was a visiting lecturer at Yale University.  Russell had just finished a broadcast and saw Truman taking a stroll downtown with his bodyguards.  Russell rushed into the street with gifts for Truman’s new grandchild.

“Everything stops, a gun comes up like this, another guy with his gun is like this. I said, ‘I’m only from the TV studio!’”

Harry and Happy eventually exchanged greetings, and a photo of the pair ran in newspapers across the country.

In an interview with the Register a few years ago, Joey Russell said, “One of the great things in life is to save a soul.”