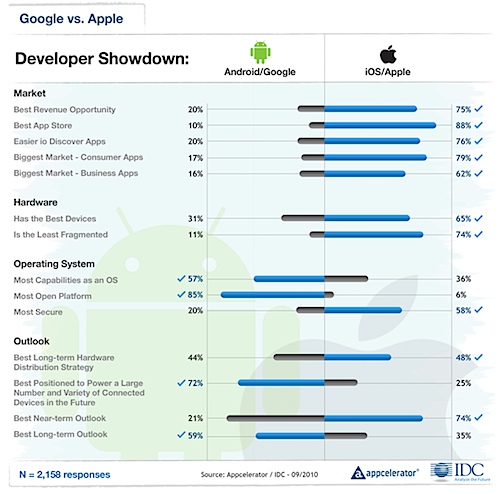 Appcelerator and IDC recently surveyed 2,363 Appcelerator Titanium developers on mobile platforms “perceptions” and “priorities” (see summary and full report over at Appcelerator). Not surprisingly, for a group that’s seeking to avoid full conversion to Apple by coding in the native framework (instead, they’re using Titanium), these developers were hopeful that Google’s rival mobile platform Android would take off:

One of the most discussed findings of Appcelerator’s June 2010 survey revealed that 54.0% of developers said Android had the best long-term outlook compared to iOS at 40.4%. Fast forward three months beyond a successful iPhone 4 launch and Apple’s recent announcement that it would be easing restrictions on developers and… this gap has widened 10.1 points. Now 58.6% of respondents in our new survey believe Android has a better long-term outlook over iOS (34.9%)

The question around coding for TVs are an interesting indication of interest in the forever sought after “last platform” to avoid the greedy tendrils of developers (aside from, perhaps, the refrigerator and toaster, both Twittering you when you need more milk and when your toast is done):

Developers are also showing enthusiasm for connected TVs, with 44% saying they are ‘very interested’ in developing for Google TV vs. 40% for Apple TV. Explains Scott Ellison, VP Mobile & Wireless, IDC, “Apps are poised to help remake the television viewing experience just as they have remade the mobile experience. Television needs new and more ef- fective ways to create immersive experiences, engage audiences with advertisers, integrate social networks, and drive viewership of original broadcasts” he added, “The television players who most effectively integrate app developers into their connected TV strategies are poised to potentially remake the television experience as we know it.”

What with Netflix providing an actual reason to get your TV on the Internet, and folks like boxee and Roku having a go at the sisyphean task, there’s stronger than ever pull to make your TV into a computer. Unlike the days of WebTV, people are taking to it. For example, Netflix said “61 percent of its 15 million subscribers streamed movies in the second quarter.” Oh, and they’re blamed (in part) for bankrupting Blockbuster.

And, once that’s done, the developers come in and it’s a land-grab at that point.

As ever, in a sort of tragic way, the marketing efforts of Sun provide a “too early” roadmap to baseline from. With Java shipping in Blueray players and hopes to spread JavaFX (coverage) to all sorts of “open screens” (as Adobe would call it), Sun put a lot of wood behind this arrow about 2 years ago. Remember that Neil Young JavaOne keynote in 2008?

Developers I talk with are iOS (iPhone and iPad) obsessed. Fueled by legends of ramen startup teams generating six figures a month, there’s a mini-bubble for mobile app development. The quickest path from compile to cash seems to be Apple, but most developers know deep in their bones it’s a deal with the Devil, or at least one of the barons of developer Hell, Lord Lockin…