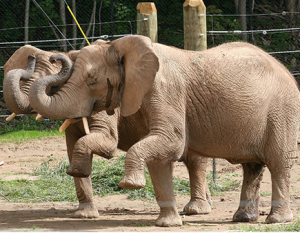 Ah, the Big Company Shuffle.  Just when an industry gets to be too boring, one of the waltzing elephants stumbles.  Will it fall?  Did it break a leg?  Or will it just shake it off and keep going?

Larry Ellison is “speechless”, but of course, not really.  Insiders are either depressed and hate the Board or happy and fired up, depending on who you talk to.  My colleagues among the Enterprise Irregulars are sharply split and opinions range from not saying anything if you have nothing good to say, to applauding the potent polymath team HP now possesses at the top (sorry, needed to get those P’s in for impact!).  There is talk of software being the “glue” (good thing it isn’t the foundation as it’s only 3% of HPQ’s revenues) and rewriting of legacies.  There is talk of this new CEO’s abrasive style.  That one worries me a bit.  The HP’ers I’ve known have been sensitive to this, and both Hurd and Carly Fiorina had problems with the rank and file not liking them.  It isn’t clear that Apotheker sets out to be a well-liked leader.  OTOH, a lot of the folks that like Leo for the job have experience seeing him in action, so maybe his style isn’t such a problem.  I’m from the school that thinks CEO’s need to be tough, but fair, and hopefully right.  Zoli Erdos, who is also an ex-SAP’er is less complimentary, but characteristically funny:

HP’s troops have never been more demoralized, and Leo has a lot of experience with demoralized troops.  Not so much leading them out, but in … oh, well.

Dennis Howlett likes Apotheker for the job, and raises an important variable I haven’t heard so much from others: Self-Awareness.  When people understand their foibles they can change.  I’ve seen it happen, even for powerful leaders with big egos.  Perhaps most especially for them.  They say you mostly learn from your mistakes, if you will listen to them.  Certainly Leo Apotheker has a breadth of experience from which to draw on.  If he has some strategies to shore up his weaknesses, he could be a real surprise.

Some predict fascinating new combinations through acquisitions–they could buy SAP, “No, that’s old news, they could buy Salesforce.”  Never mind that the market cap of HP is distressingly close to SAP’s–$92B versus $60B, and you add a 30% premium and suddenly you have a merger of equals, or that new CEO Leo was more or less fired from SAP, or the way the German company is structured and who will therefore have a say so.  Heck, never mind that HP’s market cap is pretty distressingly close to Salesforces (trading at about $15B or 1/6 of HP’s for 1/10 of the revenue of HP) or that Leo was no friend of SAP’s ByD SaaS offering by all accounts.

And while we’re on this market cap fascination, think about what it takes before Larry Ellison can swoop in and create the World’s Largest Computer Company by acquiring HP.  He has to be chortling every time his stock goes up and HP’s goes down.  “Thank you Leo for bringing me that much closer!”  The question will be, with ORCL at $137B and HP at $92B, exactly how big does the gap between the two have to get, and how disillusioned do shareholders have to be, before it becomes a foregone conclusion?  Right now, he has a gap that’s closing in on 50%.  Larry’s goal will have to be avoiding a merger of “equals” after he pays whatever premium is necessary to get the deal closed.  He needs to play for differential performance between the two companies–ORCL up, HP down.  It would be fascinating to do some deep analysis on potential market moves that would accomplish this.  For example, does ORCL own a business they could discount like crazy to take profits out of the market that would disproportionately harm HP’s profitability?

This is a move where timing is everything and the pressure is on.  If Leo stumbles, Larry will be there to catch him on the tip of his Samurai sword.  If Leo soars, Larry will have missed the opportunity to put the crowing achievement on his career.  At least for a while.  And he’s not getting any younger.  For HP, we’re off to a bad start with that stock price drop the first day of trading.  If it continues, Apotheker may need to contact Carol Bartz about joining her club.  He has to immediately galvanize the troops on some mission that is inspiring, empowering, and successful.  Does he have the reputation for doing that?  This is not a caretaker job, it’s a ship that’s hit an iceberg and is taking on water.  Bold steps will have to be taken, and quickly.

Yep, the elephants are dancing.  Because someone knows someone else, or once said something, or has a reputation for, here’s what could happen…

Are you getting a sense of the maelstrom?  It is truly a magnificent madness.  What a piece of work is the tech business!