Yesterday, Thomas Friedman of NYT quoted from the historian Lewis Mumford’s book, “The Condition of Man,” about the development of civilisation. Mumford was describing Rome’s decline:

“Everyone aimed at security: no one accepted responsibility. What was plainly lacking, long before the barbarian invasions had done their work, long before economic dislocations became serious, was an inner go. Rome’s life was now an imitation of life: a mere holding on. Security was the watchword — as if life knew any other stability than through constant change, or any form of security except through a constant willingness to take risks.”

It made chills going down Mr Friedman’s spine, for me it was another deja vu:

Being a large corporation watcher I have no problems in finding parallels to societies as a whole, except the corporation is clearly more structured entity which makes it into a faster moving petri dish of what can happen in the society as a whole. And vice versa. 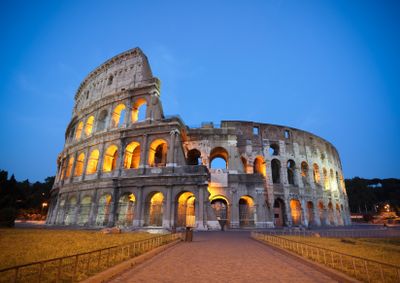 Change requires bravery, taking risks, every day, that is the law of nature, that is a basic human responsibility. Those who handle risks as a second nature are the one’s that moves us forward. Those who avoid risk at all costs are the one’s holding us back increasing the overall risk of actual demise.

Look at any large corporation and you’ll find nothing but mechanisms fostering “security” and “no-change”. Yes they talk loudly about being innovative, but mostly we know what that means; “spray painting” and “fast food’ing” all low risk “innovation”. Bonus structures based on existing products (note product manager positions), quarterly results reporting and renumeration (see stock options), position focus (read career) and many more.

“Don’t rock the boat!”, “if it works, don’t fix it!” – our language is full of it, sayings that supports the daily no-change choices.

Every now and then you’ll find a leader who “has it” and takes the risk to achieve real change. In corporations that usually means challenging their current products and services to see if they can be reinvented or if something different should be offered. Apple comes to mind, Sony many years ago, Intel also long times ago and IBM a couple of times in their history.

But the rest, and I do meet with some of them occasionally, have lost it. So unless the inevitable barbarians at the gate are of the friendly sort, their fate might be a parallel to the Roman Empire. Actually, those “Barbarians” are mostly not barbarians at all, just from some sister city to Rome that happens to have more money so they’re (read management positions) fine most of the time.

Luckily true Barbarians exists; those that do not know rules, that have no boat yet to rock, that have nothing that works that does not need fixing, that have no reward systems for no-change in place, that have no rules established, that still see their business model as something dynamic – and they’re called startups.

One response to “Romans, Barbarians, and innovation.”