I am certainly not the first to comment on HP’s decision to hire Leo Apotheker as its new CEO, and nor will I be the last (our other coverage here) So what perspective can I bring that others might have missed? If nothing else I have met the guy, and I like him – he has some old school grace about him, though he’s clearly as tough as boots. Apotheker seemed to enjoy meeting enterprisey consultant bloggers from the SAP ecosystem – headbangers like Dennis Howlett – which I found pretty refreshing. Its one thing for comms people to suggest such a thing, but another for a CEO to agree. If Leo asks to meet us in the new role, then we’ll really know HP is set for a change in comms and mindset.

When HP talks about wanting a global CEO its not kidding… in case you haven’t looked at the numbers, HP has greater market share than IBM in key markets in Europe – that is, HP’s business is stronger in Europe than in the US. So why not invest in the region by tapping a European to run global operations, and build on that marketshare? 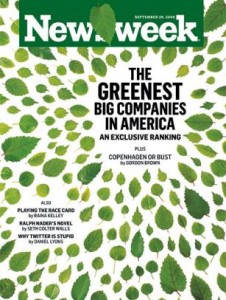 I may have been the guy that noted Apotheker’s deep sustainability credentials when he left SAP, but on hearing about the HP hire James Farrar made the point that Leo might help rebuild the HP Way. James asked Can Lèo Apotheker restore HP’s reputation on sustainability?

I actually think HP’s reputation is still pretty good in sustainability, as is its performance, but these are based on HP’s culture, rather than Mark Hurd’s leadership. As Mark Gunther writes:

HP topped Newsweek’s environmental ranking of 500 big U.S. companies, as well as a similar (but less credible) list assembled by Corporate Responsibility magazine. It has set tough goals for itself around greenhouse gas emissions, energy efficiency of its products and recyling.

But being sustainable isn’t the same as selling sustainability, and I believe that’s where the real value and force multipliers lie for tech companies. I chair SAP’s external stakeholder panel for sustainability reporting and strategy, and we encouraged the software company’s efforts to get serious about selling products to its customers that drive sustainability. SAP’s environmental footprint is small, because software is pretty clean. Its customers on the other hand are some of the world’s great polluters.

HP with its hardware manufacturing has a higher footprint, but it can still do a great deal to help customers become more sustainable. Business agility and sustainability are increasingly two sides of the same coin: the US military in Afghanistan, for example, has recognised the fact, and is currently looking to reduce its reliance on oil. Renewable energy can be sourced locally – Afghanistan is short of many things, but sunshine isn’t one of them.

“I think many people assume, wrongly, that a company exists simply to make money,” Packard told an HP management training session in 1960. “While this is an important result of a company’s existence, we have to go deeper to find our real reason for being . . . . A group of people get together and exist as an institution that we call a company . . . to do something worthwhile — they make a contribution to society . . . . The real reason for our existence is that we provide something which is unique.” [italics mine]

HP has been striving to find a unique story for a few years now (HP Invent and so on). Perhaps a relentless focus on “shareholder value” isn’t the way to establish one. Sustainability strategies can certainly drive customer penetration and engagement– just ask IBM about Smarter Planet.

HP is currently a product company more than an ecosystem company, which needs to change. We’re moving to the services era. Businesses around the world are now wondering how to build app stores, how to take advantage of the cloud. HP has some of that web ecosystem experience in Palm – the question though is how to unleash it. It also has some interesting consumer web properties to build on. Developers are the new kingmakers, and HP has to attract them to its platforms, and those of its clients. Everybody wants an app store…

SAP in its pomp was all about the ecosystem, balancing competing interests. Apotheker was right there – to blame him now for a couple of bad quarters, after a 20 year career kicking ass, seems increasingly short-sighted. Would I have handled increasing maintenance fees for customers to match Oracle’s rates differently? Yes I would, but the decision to tough it out was SAP, not just Apotheker’s.

It will be interesting to see whether Apotheker strives to make the company more open and more collaborative. That would seem to be an area of major upside. Talking of upside – for all the initial burst of excitement around Hurd’s leadership at HP, he certainly didn’t drive a coherent end to end software strategy at the company – which is kind of odd because software is where the margins are, as IBM increasingly recognises (Software Group now runs Systems and Technology at Big Blue). Oracle is going to be giving away hardware to support software sales, or vice-versa, and HP needs to be able to respond. Leo is clearly a guy that gets software. He also knows Oracle’s business pretty well, and of course SAP’s.

While the Leo hire is a big deal, the one two punch really struck me: the HP board announced not only that its hiring Apotheker but Ray Lane is become executive chairman. The WSJ noted the Lane move immediately, and its was right to call out his VC experience. As a managing partner of Kleiner Perkins Lane is one of the best connected M&A guys on the planet. You won’t see HP overpaying for any acquisition targets in future. But Lane is also an ops guy – for many years after he left Oracle there was a Ray shaped hole at the database giant. People kept asking, for years afterwards, how Oracle would replace Lane as Ellison’s number two. I guess we finally got the answer- Mark Hurd.

But back to HP. Lane has incredible strength in depth, and I think skeptics on Apotheker may be failing to realise HP has finally established the kind of CEO/Chairman team most companies would kill for. Good governance calls for a strong independent chairman – who is not also CEO – and now HP can move forward with just such a structure.

Its going to be very interesting to get beyond conjecture and see what these guys actually do.