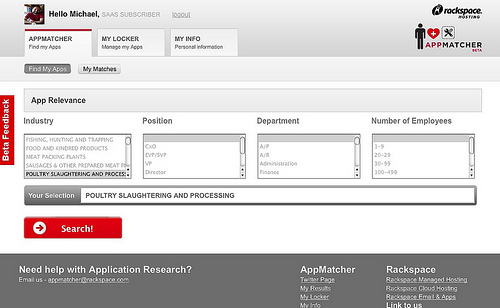 Rackspace got into the app store/marketplace space today with the launch of it’s AppMatcher service. You fill out some corporate demographics – type of company, number of employees, budget, and features needed – and AppMatcher tries to suggest SaaS applications to you. The fact that eHarmony was one of the presenters today gives you ample metaphor to understand the app-matching Rackspace is trying to do.

The idea is nice, for sure: as Rackspace’s Andy Schroepfer said during the announcement, getting found is key to the (now) crowded SaaS and web app landscape. This problem exists in spades in the iTunes App Store, where app developers carp like 49′ers who can’t find their claim among the crowded creeks. At the moment, AppMatcher claims to be serving up 1,000 apps, which is a lot to whack through. While it’d be easy to restrict the apps to ones running on Rackspace, it looks like they’re going to open submitting apps to anyone, no doubt following the “grow the pie, and our slice is bigger” strategy made famous by Google and all it’s Internet freebies…