Long before I had a blog of my own, way back in May, 2009, Vinnie Mirchandani, who runs Deal Architect and wrote The New Polymath along with his very active consulting/speaking practice, encouraged me to do a guest post on another of his blogs, New Florence, New Renaissance.   He was hosting a series of guest posts about how technology was influencing our hobbies, and I really struggled with my submission because I don’t have a lot of what most people think of as hobbies.  But I finally wrote about what mattered to me — friendship — and I was inspired to repost that guest post here after the incredible outpouring of friendship toward Vinnie over the last two days.  I have never been prouder of my fellow Enterprise Irregulars and the very irregular Dennis Howlett than when I watched them rally to support Vinnie and his family after Vinnie collapsed during a speaking engagement on Thursday morning.  As you can see by the linked posts on the Irregular’s Web site and Dennis’ blog hosted by ZDNet, Vinnie is going to be fine, but he does need some time to heal.  So, while Vinnie may not be able to blog much over the next few days, I thought I’d honor him and drive a little traffic to his blogs by reposting here what he encouraged me to write early last year.  This one’s for Vinnie!

This continues a series of guest columns on how technology is reshaping hobbies and passions, basket weaving, rugby or whatever.  This time it is Naomi Bloom, managing partner at Bloom & Wallace. She has spent a lifetime and is a leading authority in the Human Resources field.  How appropriate her that her hobby is people, her friends. She describes how technology has made it easier to stay in touch with friends all over the world.

“Reading the many terrific entries in Vinnie’s series on technology and hobbies, I was awed that these oh-so-busy and accomplished professionals were able to commit the time and mindshare needed to pursue anything other than work.  This series made me stop and think about my own hobbies/passions and the fact that I spend my limited personal time in such diverse ways that nothing jumped out as a classic hobby or passion.  And then I thought about this some more when I was in Mexico last month (March, 2009) on my first totally unstructured vacation in many years.

I spent long, all afternoon, typically Mexican lunches with local friends whom I met more than thirty years ago when Cancun was very young (and so were we) and with whom I’ve been friends ever since.  Raul Vargas came to Cancun to start the first dental practice there, and I met him shortly thereafter when another friend took me to his office to have a glass shard removed from my foot.  We got caught up on children and (unbelievably) grandchildren, careers and travel plans, and remembered sunset sails while we wondered where the time had gone and then ordered more sipping tequila.  We were lucky to have had our “moments” before cell phone cameras, recorders and Twitter would have broadcast my cantina guitar playing and singing to the far corners of the globe.

Thinking of Vinnie’s guest series, I realized that my real hobby, my passion is friendship, and that my real talent is for beginning and sustaining friendships through every stage of my life and in my travels around the globe.  And all of these friends would say that I’ve never dropped the ball, even when we depended on annual snail mail holiday cards and the even less frequent phone calls that none of us could afford. But oh how advances in communications and collaboration technology, with its ubiquity and ever-reduced costs, have made my passion more pleasure than challenge. 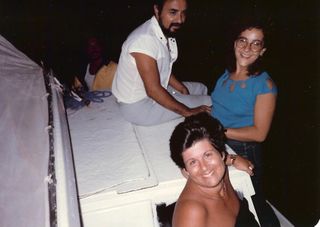 So who are these far-flung friends?  Well, in addition to the Cancun contingent (young Raul in photo on right – yes, I was also young then) there’s Marco Cruz, the top alpinist in Ecuador with whom we traveled down the Humboldt Trail, walking around volcanoes and trading in native markets.  There’s Tom Feinle-Bisset, who guided us through the Flinders Range in Australia, getting me to eat camel (did you know that the Great Red Center is overrun with them?)  He also introduced us to the owner of Arkaroola (the outback station where Uranium was mined for the Manhattan Project), who graciously flew me over the property while my husband survived the Ridge Top Tour.  There’s Graham Barnes, the founder of a small HRM software company in the UK whom I met when his firm was the original licensee of my HRM Business Model “Starter Kit.” From childhood, there’s Mark Lediard, who’s spent his life improving public health systems in the far corners of the world and is now a life coach based in Jakarta.  Linda Nadelman Leeds, was my roommate during my first years out of UPenn, when I was doing my MBA nights, and we stayed in touch even as she, her husband and son (they left when he was four) did a fifteen year circumnavigation under sail.  And then there are the wonderful Aussies we met when one of our neighbors in Fairfax, VA leased his home through the Australian Embassy to their Air Force attaches, and my cousin Joel Russell, who’s the last of the Borscht Belt comics and always worked my family into his act.  You get the picture.

Keeping in touch with these wonderful people, sharing our lives so that the conversation begins without pause whenever we meet, has gone from painfully translated, hand-written letters that took a month to reach them to instant emails that I write in English and which are translated in both directions by Google translate.  I’ve gone from trying to remember who’s related to whom, not to mention birthdays and anniversaries, in our extended Bloom and Wallace families to having Geni keep track of everything.  I love the speed, intimacy, and sheer joy of sharing captioned photographic journals of our travels/visits/daily life on Smugmug with those who shared those experiences and others who might be interested, as well as knowing that our digital camera and separate hard drive cost so little to use and carry so little weight that we can just keep snapping and snapping.  Social networking has given me a way to reconnect and stay connected with childhood and University friends as well as early career colleagues with whom I would otherwise have lost touch.  My Palm sends me birthday and anniversary reminders, and there are e-Cards available in most of the languages I need to celebrate these occasions.  Next up, Ron’s testing Skype with Webcam for conferencing with his siblings and his 94-year-old Mom (we lost Grace 7/25/2010 at 95+) at her retirement home.  Once tested, we’ll hook up as many as possible friends and family. When the Palm Pre comes out (what a difference a year makes), I’ll make the move as soon as possible, in part to replace the broken camera on my Treo so that I can share photos instantly via Twitter and something like Flickr.

Age and health issues will slow all of us down eventually, and we won’t be able to rendezvous with scattered friends and family as often as we’d all like, but the advances in what I call interpersonal technology will keep us all connected, sharing thoughts, pictures, dreams etc. I can no longer imagine a world without instant translation of Hungarian emails or baby pictures sent from the hospital within moments of the event or being able to send our annual letter with links to photo albums to hundreds of friends and family and getting theirs in return with translation attached.  Does friendship qualify as a technology-enabled hobby/passion?  It does for me (and never more so than in how social tech allowed Vinnie’s friends to support him over the last couple of days).