Which cloud is best for ISVs?

Cloud applications are increasingly becoming a mainstream choice for businesses, and that means a lot of ISVs are pondering which platform to use as they begin to roll out SaaS offerings to respond to that market demand. Unfortunately, the choice that confronts them is bewildering, with any number of established and start-up vendors and providers touting everything from conventional software platforms to managed hosting to platform-as-a-service. It should come as no surprise therefore to find that the opening morning of next week’s SIIA OnDemand Europe 2010 conference in London has not one but two sessions on this topic â and I’m moderating both of them (see disclosure).

This is a topic I’ve given a lot of thought to over the past couple of years, arriving at a framework for evaluating cloud platforms that consists of four components, as set out most recently in my post Defining the true meaning of cloud. You can hear my advice on how developers can use this framework in the video below, which I recorded earlier this year while attending the SIIA All About Cloud conference in San Francisco. 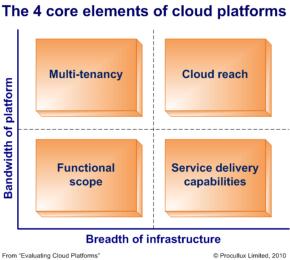 There’s also a diagram I use to illustrate the framework, reproduced here, which first appeared in a posting back in January, when I wrote: “Where cloud platforms differ crucially from conventional software platforms is that their native capabilities have to extend into three additional, distinct elements beyond the core functional scope. This is mapped out in the diagram alongside.”