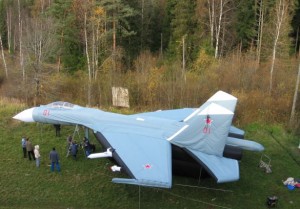 File this one under the post Cold-War Spend Management files. Apparently, the Ruskies have developed an incredibly fearsome and threatening technology that can strike panic into the hearts of defense analysts relying on satellite flyovers. According to the above-linked ABC News article, “Russia’s Defense Ministry is in talks with a private company called Rusbal to develop a range of inflatable decoy armaments they could place in battlefields … men fire up an air pump and within minutes there stands a towering S-300 anti-aircraft missile launcher.” How’s that for a military cost savings invention?

The story actually raises a somewhat serious issue. In an economy where many governments must confront declining tax receipts while at the same time facing continued military cost escalations, we’ll need radical new ways of controlling military spending while maintaining the capability to meet our defense needs. Now, inflatable blow-up tanks — no word yet if the French military will find an alternative use for such devices — may not be the best way to maintain an ability to project actual force, but at least someone is thinking creatively…