Or how SAP chooses stability over change.Sounds smart on the surface until you start to think: Change is the only possible path to survival, stability can only be temporary, that’s a law of nature.

Now back from yet another SAP Teched, again well organised and highly interesting. And I must admit, Berlin is one of my favourite cities so all’s good when one is invited and costs are covered.

That was my disclosure if you find me too gushing about SAP, and my second disclosure is that I’m drifting towards becoming a head on competitor, which might be blamed if you’ll find me all too negative.

So what’s my wrap? I won’t go into all, I’d rather stick with one single issue. An issue which is long term more important than all other combined…

As always these shindigs starts out with the keynote(s) setting the big goals and general framework for their efforts and plans. As always, and obviously, innovation is a key theme. This time summed up by three focus areas – on demand, in memory (DB), and mobility.

But that’s just window dressing, behind there’s a big lurking policeman; an overall guiding principle for their innovation, and his name is: “Don’t touch the core, innovate on the fringes”. 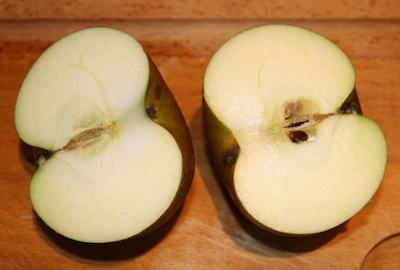 Colour me a sceptic, but when I hear that message I immediately “read” two things:

But that sense reflects only the surface. Behind lurks reality; all businesses must move forward, new business models (as in the whole business) attacks the old business models every day, and with that effectiveness of the business as a whole makes the efficiency of business operations irrelevant. And the current core is stuck in one way to do business, it has no leeway for testing out other ways, its focus is on operational efficiency.

I agree that the core should not be messed with, huge numbers of users are dependent on it, and for SAP it’s a core cash flow source as well.

But it does not preclude that they should challenge it!

In fact, if they really mean not to “touch the core” it implicitly means that that they think the present core (architecture) will last forever. And that is simply illogical and cannot be.

Let some group, entity, skunkwork, be free to challenge the old core and experiment with new and very different cores and architectures. They should revisit the business situation at their customers, then proceed backwards not taking anything for given or set in stone.

It could be seen as a simple insurance premium payment. If the skunkworkers come back and say “the core will last forever”, well that’s good, like my house not burning down despite me having an insurance. Or it could lead to “oy, here’s an alternative, lets invest in exploring that further”.

Not doing this is illogical, and very dangerous in my view. Good for me as a long term competitor though as I do think their core is in for some nasty surprises.

4 responses to “Don’t touch the core”