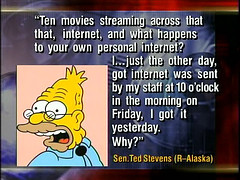 Regardless of how free-marketeers (like me) feel about it, ‘Net Neutrality‘ is about to be upon us, as the FCC yesterday voted unamimously to begin drafting new rules on network providers.

Challenges are already being posed, and if there is a significant change in the makeup of Congress in the 2010 elections this legislation could be significantly affected.  For now, however, network providers will be facing increased regulatory scrutiny of any activities designed to ‘discriminate’ among different types of network traffic.

The clear winners are those companies who sell products and services over the internet – particularly those that provide multimedia content since they consume bandwidth heavily.  These include $GOOG, $YHOO, $AAPL, $AMZN, $NFLX and $NWSA.

Internet telephony/communication providers such as $VG, $EBAY (Skype) and $GOOG (again) should benefit significantly as well – network providers have been reluctant to support these services since they compete with their own offerings (for instance, Google Voice on the iPhone) but that support will now be required and subject to regulation.

Losers are those companies that provide the network itself – such as $VZ, $T, $S, $Q, $TWC and $CMCSA.  The expansion of these rules to the faster-growing wireless sector could be particularly damaging.

Also lined up to lose are the network equipment providers, particularly those heavily exposed to the carrier market – such as $CSCO, $ALU, $JNPR, $ERIC, $TLAB, $CIEN & $ADCT.

Some of these companies have already hedged their bets – for instance $CMCSA by moving into content and $CSCO by moving into consumer/wireless technology.  The question is whether these newer lines of business can make up for the decline in their historic core businesses that Net Neutrality – if fully enacted – will cause.

As alluded to earlier, whether Net Neutrality actually gets enacted is far from a done deal, and much will depend on the next congressional election.  But for now at least, it’s a W for the Obama administration and investors should consider hedging and/or reducing their exposure to the network providers and network equipment sectors.

As with most regulatory changes, the potential downside is greater than the upside.  While the media and content companies are undoubtedly celebrating, the only near-term benefit is they gain protection against potential higher cost structures, since this legislation promises to prevent carriers from imposing those costs.  But it does not create any significant new revenue streams.

On that note, the Venture Capital industry has thrown its weight heavily behind Net Neutrality as well, in the hope that a ‘level playing field’ will open up opportunities for investment in new products and services.  It remains to be seen whether that now happens – but if it does it is more likely to create new competition for the current winners than new opportunity for them.