Microsoft’s Extraordinary Quarter, Valuations, and “Who Owns the Cash?”

As usual, there is another fascinating discussion underway among the Enterprise Irregulars.  And again, as so often happens, there are related discussions.  In this case we have a discussion about whether there are any companies who’ve reached $100M in revenue with 100 employees, and one about Microsoft’s recent quarter, its cash position, relative valuations versus companies like Apple, and the idea that Microsoft’s cash belongs to shareholders.  It’s fascinating to watch these threads come together serendipitously, and then extract further meaning from the gestalt. 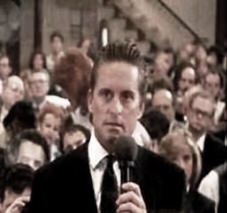 Let’s start with the $100M/100 employee thought.  Are there any such companies?  Perhaps, but they are certainly private and they are likely insanely profitable.  The profitability piece means there would be a tendency to spend the profits to reduce risk (and what won’t be said, make everyone’s life easier) and explore new growth possibilities.

I think it is very likely doable to build such a company, just that few are motivated to do it and would perceive such a model as very high risk.  I also think some of the technologies you need to do it may not have existed until recently.  The alternative to technology is an unfair market advantage as evidenced by gross levels of profitability.  Let’s talk about each.

Go through the laundry list of $100M businesses, and ask yourself what are the characteristics that drive headcount that have to be minimized:

–  Leveraged marketing and sales–no feet on the street.  So it’s marketing driven, whatever it is, and it’s either sold online or through a dealer channel that doesn’t rake too much off so you can transfer cost to the channel.  But supporting the channel can drive up heads, so you almost would need something they have no choice but to carry.  That leads to an idea that is both an unfairly strong brand and is also something of a monopoly.  Not sure what qualifies today, but back in the day DOS would have been a great example.  More on that in a second.

–  Product:  Platforms and on-prem drive spurious headcount.  At Callidus, we estimated we could get by with 40% fewer heads if we only had to support the current release on 1 platform and we would have no loss of innovation.  I will go further.  The optimal number of developers is a maximum of 10.  Any more than that and your team loses efficiency due to communication loss.  Give me 10, and I can build almost any single product you can imagine in 12-18 months or less.  Been there, done that.  Quattro Pro kept up with 10 developers against Lotus and MSFT teams of 100 or more.  However, they do have to be the RIGHT 10 developers.  I could write a long post on that, but will spare you here.  To get more than 10 working efficiently, you need a loosely coupled application suite, where each module has its own 10 and the communication requirements between them are modest.

–  Manufacturing and Fulfillment:  Clearly (well, maybe not, I guess I can imagine some cases, sort of) it will be hard to get there with physical goods.  You can outsource it all.  Could a Dell back in the day do $100M with 100 and all the right outsourcing?  Maybe, but we are speaking of software here.

The Internet and technologies like Social CRM make some of this possible.  The alternate model, which is a product with ridiculous margins and brand ubiquity to drive unbridled demand, has also existed.  Back in my Borland days, we used to envy MSFT having a $250-300K ratio of revenue per employee.  We knew that the profitability was very uneven and that the monopoly DOS franchise financed a lot of it.  I have no doubt that DOS could’ve been cut out and scaled to a $1M per employee business.  This is probably true of some Google businesses too.  But, these companies never do that.  They finance the future and they reduce risk by spending the profits today.

Now, one of my esteemed colleagues mentioned that it would be a terrible investment decision for a company with such margins not to embark on a plan of ambitious investment.  That is certainly the conventional wisdom, but the track record says otherwise.  The majority of M&A transactions started out with just such a thesis and wound up net destroying shareholder value.  I would venture to say this is probably also the case for large companies trying to start new businesses.  It is rare that they can get them up to the levels of performance of the core franchise, and hence they are dilutive.  This was certainly true for Oracle and its apps business relative to the DB business, for example.

It will be interesting to see whether today’s technologies and Internet allow some of the bootstrap players who’ve already gotten quite large to get there.  Their motivations as “lifestyle” companies (and I don’t say that like it’s a bad thing), might lead them not to care about this “invest to grow” imperative.  I’m speaking of companies like a SmugMug or a 37Signals.  I suspect their revenue/employee metrics are pretty close already even if the absolute revenue numbers are not.  You don’t have to read many interviews with the SmugMuggers to realize they’re in love with photography and their customers and are unlikely to move too far afield of that.

Now we see pretty clearly the link between the $100M/100 and the Microsoft quarter.  Both are examples of what I will call “unfair profitability.”  These are profits born not just of good ideas and good execution, but of some sort of lock-in effect that inhibits competition over long enough horizons to build such franchises even though the profits are so huge that competitors should be homing on it like heat seeking missiles.  Coincidentally (can there be so many discussion coincidences, or is there more at work in the Universe than we know?), there is a fabulous article by Jim Stogdill on this very issue of unfair profits called Points of Control = Rents.  Worth a read for a good discussion of who has unfair profits in our world today and how did they get them.

We’re on the downslope now folks, so bear with me.

There should be no doubt in your mind why AAPL gets a higher valuation.  In fact, the contrast is so stark you may wonder why AAPL doesn’t have an even bigger premium.