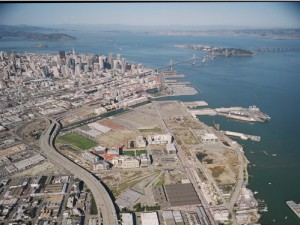 Of course, this is a great endorsement for the city and the region which has long been a center of entrepreneurship and innovation in technology.  But it also does some good things for Salesforce.com.  It will help to consolidate the company’s headquarters staff under one roof, though thanks to innovations like Salesforce’s Chatter collaboration software, geographically locating the staff will likely become less important.

Nonetheless, there is ample evidence that companies that have campuses can offer their employees better quality of life—both at work and during off hours—thus making the employer more desirable thus making it easier to attract top talent.

I spent a day last week at SAS Institute’s Cary, NC campus and saw first hand how this can work.  The company was founded in 1976 and is still private despite having revenues of $2.31 billion last year.  SAS may be a model of what a company can accomplish with some luck, hard work and a campus.  Some quick numbers they give visitors tells the story:

Founder and CEO Jim Goodnight, PHD likes to bring everything back to efficiency and believes his campus promotes it in his workforce.  People who have less to stress over, like child care for instance, are more productive.  So it’s no surprise to find the following amenities on the SAS campus.

Child care, an infirmary, various athletic fields and facilities including a junior Olympic sized pool, three subsidized cafeterias.  My favorite amenity though is the two artists in residence who develop some of the art on the walls—the better to promote creativity in the staff.

It goes on but the major point I wish to focus on is that this private company has never had a layoff, never had a down year, always made a profit and never borrowed a dime.  It doesn’t hurt to have good products and shrewd management to pull off this kind of feat and neither does treating your people well.

This is a very different model from what we see in most of the rest of the U.S. and maybe the world today.  To find a model like this you need to go back to the mid-twentieth century and the industrialist Henry Kaiser, founder of Kaiser Shipyard which built Liberty Ships in WWII, Kaiser Aluminum and Kaiser Permanente which initially provided healthcare for his workers.  You should look him up.  Meanwhile I look forward to seeing what Salesforce develops on Mission Bay.