I hope I can be forgiven the cute headline. It speaks to a series of events that were heard in Oracle Open World messaging, where the word “open” appeared much less frequently than in years past. Oracle is fortifying its borders, opening new fronts in its market battles, and slowly closing itself off from some former partners and community relationships. It’s Fortress Oracle time. Its overall posture has hardened, and the implications for any but the largest MySQL customers are worrisome.

Many actions support this interpretation. The “fork you” message to Red Hat at OOW was an obvious indicator, tightening the OS play that accompanies the hardware ownership now rounding out Oracle’s full-stack story. Now, a few weeks later, Oracle’s move to drop low-end MySQL support, abandoning/conceding low-end customers to others, seems indicative both of Oracle’s willingness to move away from “open,” and to minimize investment in low-end customers. Mark Hurd is the new owner of support, and his reputation for cost-cutting should not be ignored in considering this; moreover, Windows is the majority platform for MySQL, and Oracle doesn’t want to invest there either.

On another front, Oracle’s all-out assault on SAP in court, while clearly intended to defend the support cash cow, is equally indicative of the company’s posture – it’s about high-end, high value situations and holding on to every piece of account control possible. Collateral damage to HP, as private investigators span the globe to serve Leo Apotheker with a subpoena, is clearly not a problem as far as Ellison is concerned. And finally,  the Apache Software Foundation’s decision to call Oracle out over its lack of follow through on its java community process commitments shows that the “closed is the new open” thinking is being recognized in the community. Oracle can read how the market is reading all this. But there is no sign of a change in its posture.

Much of this activity has taken place even after the OOW dust has settled a bit. The conference – which is clearly too large now, by the way, for any meaningful attempt to cover it all – was 7 weeks ago. The steady cadence of database moves Oracle is making to sustain its continuing success looms even larger than it did at the time. The numbers are good: new kid on the block Mark Hurd announced 32% growth from the OOW stage, albeit without splitting database revenue from middleware. These numbers games get tiresome – it’s that analyst Sudoku thing again. Still, the momentum on the database side is obvious. Closed or not, Oracle is formidable and shows no sign of flagging. Where does MySQL fit?

Oracle conducted a MySQL event in a hotel near the main show the day before OOW opened and before Larry Ellison did his first of two very similar keynotes. Ed Screven reminded his audience that the previous time they met, his story was about support for industrial-strength Oracle offerings like Enterprise Manager, Secure Backup, and Audit Vault. Much of that has been accomplished. This time the story focused on “the most complete LAMP stack” and Oracle’s intent to develop and promote the product there. The slides came thick and fast: integration complete with Goldengate, progress with Linux and Oracle VM this year. 2011 will see more integration with many other pieces. Tomas Ulin highlighted version 5.5.6, with a solid, well-received list of features: InnoDB now the default engine, ACID, FKs and crash recovery. Semi-synch replication, heartbeat, better usability and diagnostics. Much faster – 10x in recovery. More buffer pools, rollback segments in InnoDB – their team working with the Oracle database team. Enterprise backup also supports MyISAM and it’s cross-platform. Cluster 7.1 provides better info about what’s going on inside: buffers, etc with NDBINFO. The movement is clear – Oracle’s focus for MySQL will move upmarket, and its interest in, and support for the lower end, is unlikely to be a focus.

[Edited 12.15 11/10/10 – MA] What I thought was a final example of the gradual changes was published by Digitizor in a post on the “removal of InnoDB from the MySQL classic edition, now positioned as the embedded solution.” It’s seen in the support pricing chart shown here (click to enlarge). But that impression was inaccurate. Peter Urban of Oracle was kind enough to point me to a blog post discussing this, which says “The Community Edition of MySQL continues to be freely available and licensed under the GPL (including the InnoDB storage engine). ” 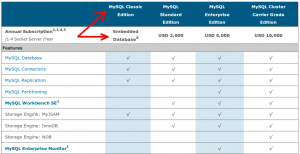 Oracle has revised the chart, it’s available here. The embedded edition is not listed at all; a link leads to a table about it, which makes mentions of support costs in a footnote: Oracle Premium Support for MySQL is available separately (extra cost). A link in that footnote leads to another page – it doesn’t have prices either. The Community Edition is also linked to elsewhere; support is not discussed on the linked pages. Reports about dropping the low end support option are correct, and the blog post suggests that nobody really wanted it anyway. I leave interpretation of all this to the reader; your attitude about it will depend upon your use case. [End of edit.]

So, where else might the MySQL target audience – especially at midmarket and below – go? There are credible open source RDBMS choices: Ingres has had steady growth since liberating itself from CA, and even has an emerging contender for the ADBMS sweepstakes with its intriguing Vectorwise offering. PostgreSQL has its advocates as well. Another answer is offered in an excellent post by Krishnan Subramanian in his Enterprise Irregulars blog: CouchDB. For many SaaS vendors, and customers with a preference for controlling their own environment in a very hands-on way, CouchDB and other NoSQL alternatives may well be a solution.

In fact, even at the MySQL event, Sarah Sproehnle from Cloudera presented on Hadoop. She noted that Facebook has 15 PB in its Hadoop cluster, and Netflix and last.fm are using Hadoop under recommendation engines. ContextWeb, eBay and Orbitz for ad targeting.  Yahoo Mail for spam detection: a machine learning application. “Why Hadoop? More capacity, more data per query, append-only cases, different languages, unstructured data.” Sarah pointed out that you have to write code for job setup, input/output formats. Every time. In an interesting twist, she noted that “You need a shell like MySQL too,” making the roles seem to reverse. Cloudera is also touting Hive, both as a query language (HiveQL) and a metastore for schemas.  HIVEQL supports “most of SQL92, no subqueries, inline row update, no transactions.”  Other Cloudera Hive features: partitioning, UDFs, “sampling”, JDBC/ODBC, HBase integration. Cloudera supports Sqoop for inserts into a database, in parallel, using fields and lines with terminators, and it will do a CREATE TABLE for you. Still: missing a lot, methinks.  Cloudera’s site has a free VM you can use to get experience.

It’s too early to say whether the movement away from MySQL will accelerate. But this observer is certainly seeing a rising chorus of interest in the alternatives. And as the departure of Oracle employees associated with Open Office and Java continues, one wonders if the same can be expected with MySQL. Oracle’s posture is doing little to make it seem less likely.

One response to “At Oracle, Closed May be the New Open. Whither MySQL?”