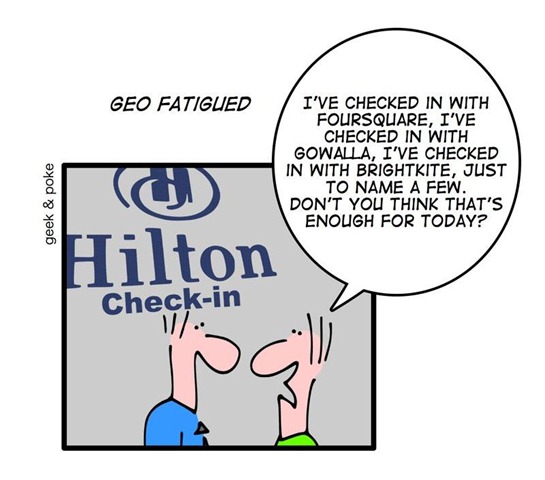 Danny Sullivan wrote up a piece on Foursquare that perfectly encapsulates the issue I have with Foursquare (and their ilk) these days… summed up as “really, who gives a shit?”.

I have really made an effort to apply myself to FourSquare and have accumulated a handful of mayorships and a dozen badges in the process… not a power user by any means but probably more active than the average Foursquare user. Lately my usage has dwindled because Foursquare is missing something pretty important… namely what’s in it for me!

A key part of the Foursquare ideology is underpinned by incentives to create content on the network, however those incentives are predominately in the area of social signals. There is a lot of discussion about social signaling in the context of network applications and while many definitions exist let’s just say that in this context social signals are users broadcasting traits about themselves, in this case mobility and proficiency with LBS services, in order to achieve the benefit of reputation and influence.

When I check in to a location and share that, or achieve the mayorship of a location or a new badge what I am signaling is that I am influential as a function of my ability to achieve status in a game environment. It’s really quite simple and this has worked out really well for Foursquare (and other early adopter targeted applications… Rockmelt is playing this game quite well at the moment) however at some point the influence aspect diminishes as the service itself becomes more popular and the shiny object becomes tarnished and less exclusive.

At this point a company needs to make a subtle shift from providing reputation incentives to economic ones. For example, what is the point of being the mayor of anything, especially if I have to work for it, if I don’t get any benefit out of the title. The metaphor of mayor is actually quite appropriate, what does a real world mayor campaign for after all? The plush office, preferred parking, cutting in line, guaranteed good seats at events, and the prospect of higher office. What does the mayor of a Foursquare location get… with few exceptions pretty much nothing. Want to do something really valuable for me… validate my parking!

One of the things that struck me about Crowley’s interview is that he, like a great many people in this business, displays a degree of indifference to how people actually use services like this. It’s not that he doesn’t care, quite the opposite I believe, but through his comments I can’t help but believe that user intentions are secondary to what he believes Foursquare should do.

For example, friend finding is a popular promised benefit from location based services yet I have never found this to be compelling or interesting as a feature I would want to take advantage of… I’ll let Rocky explain why.

The point is, if I want to find you I don’t need Foursquare to act as the intermediary. There are of course exceptions to this but it’s an edge case for me so I really don’t understand why companies invest product time and energy in promoting this as a feature. There is nothing new about this either, Loopt started out doing friend finding but in the last year seems to have abandoned that as a primary benefit, instead focusing on merchant promotions.

Tips and discovery is an area that is currently underserved in Foursquare locations and while I get what Crowley is saying about discovery and location experience but even that falls flat for me. Much of what constitutes tips is really pretty boring stuff because let’s face it, not every day is a new adventure waiting to be discovered.

For example, a useful tip for the Caltrain station is Redwood City is that additional parking is available to the north of the train station and parking spot #561 is not in the system (free parking!). If Foursquare gives me more of that, count me in but if the bulk of the tips for any location are really nothing more than nonsensical musings then why bother?

There is a lot more I could write on this but let me close by saying Foursquare isn’t a location service at it’s core, to me it is a business directory that relies on location features throughout the user experience. What happens in the directory is not that much different from the directories that have preceded them, which is that people like me use them to discover, build awareness, and ultimately take advantage of promotion throughout my day to day life.