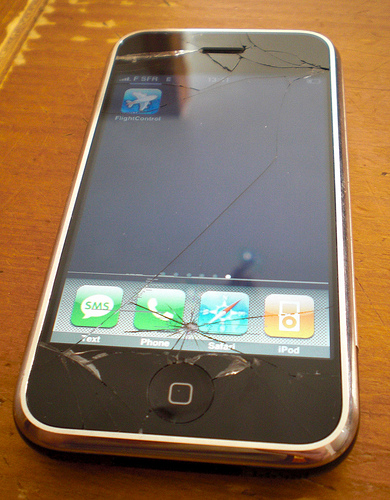 Thanks for the pic @psd!

Ana Nelson, the creator of Dexy, a really cool tool designed for people writing, and writing about, code, pinged me the other day to say she’s considering dropping Apple. In the email she also mentioned that another friend of mine – Kirk Wylie, the guy behind one of London’s most interesting  (and investable) startups – OpenGamma, is thinking the same thing. Her email read like a blog post, so I thought why not make it into one.

So here are some notes from the field. While I realise two swallows does not a summer make, I’ve been hearing complaints about Apple from other folks in my network. If you have some thoughts one way or another please do let me know. It would be fun to collect some antimonials so if you are thinking something similar please comment, or fire over a paragraph of your own for me to add to this post – hashtag #dropple. Please check out my other coverage on Apple and the permission-based web here and here.

“When I was at OpenGamma’s offices recently, Kirk was saying he probably won’t be buying another Mac. I was agreeing. The backlash is gaining momentum.

The Lion OS is too scary, on top of what has happened to Flash and Java. It’s clear that Apple’s dream is that nobody can install anything on a Mac without Apple getting their cut and having their say. This is not how developers operate, especially open source developers used to autonomy and flexibility. Being told to choose your tools from a pre-approved list is about as evil as it gets to us, and there’s been no credible reassurance that this won’t be the case soon.

I think Apple is counting on its consumer market share to retain developers. The prospect of being an App Store lottery winner will be enough of an incentive to keep developers building apps for OSX and the iPhone, and probably even paying for the privilege.

Well, maybe they’re right. Some software companies probably will be willing to do that. But those individual developers who recognized OSX for what it was in the early days and jumped on board writing incredible apps the likes of which no Windows user could dream of because they ‘got it’, those developers who rushed to sign up to write iPhone apps just because they could imagine what you could do with an accelerometer, those developers who built apps that no committee could invent, in short, those developers who made Apple’s vision actually work. The ones who provided the momentum, the excitement, the first cool toys. The ones who prevented OSX from being the next NeXT. These developers won’t stay. As individuals, they’ll switch platform. As employees, they’ll switch jobs. Creative and passionate people creating awesome stuff on the leading edge. Walled developer garden. Choose any 1.

I’m particularly angry on behalf of the academic community who bought into the OSX vision in huge numbers. Remember the supercomputer built on top of the (now discontinued) XServe server? I watched Apple’s market share at one particular academic conference go from about 20% to 60% at 3 successive conferences (a 2-year period). A huge amount of academic software is written in Java. Indeed, this fact made it possible for many academics to switch to OSX in the first place. Now the future of these investments in hardware and software and sweat equity is uncertain. At least we can move our number crunching into the cloud, maybe with a nice iPad interface to keep an eye on things and view the output, but this golden age of XServes running XGrid seems to have been all too short.

I’ve been doing a lot of my programming work within Virtual Machines these days, even on my Snow Leopard machine with its Darwin underpinnings. It’s a great way to work, I can test software on multiple linux flavours and use whichever is most convenient for a particular project. I can take snapshots and revert my machine to previous states. Working with non-Darwin OSs has reminded me how frustrating it can be …