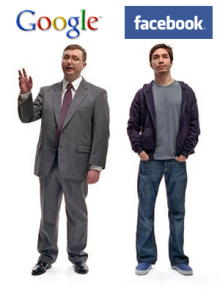 Have you noticed that Google looks terribly stale when compared to Facebook? It’s not that Google’s products are weak by comparison but rather the simple fact that Facebook isn’t locked into paradigms imposed by having widely used products that reflect how earlier generations of users see them. More importantly Facebook has a distribution capability that equals Google.

I have to admit that I don’t fully grasp what Facebook is doing with their messaging platform but I very much get it that this is a lot bigger than email and that’s kind of the point. Facebook apparently isn’t interested in building an email system and because they don’t already have an email system that acts like Gmail or Yahoo Mail they can break free from that paradigm.

Gmail was pretty breakout when first launched (I received my first gmail message on 4/14/04… six and half years ago!) but it’s hardly what you would call leading edge today. Massively successful by any measure, Gmail is just email with a better interface and even the features that have gotten a lot of attention lately, like priority mail (a better filter, really), are incremental at best. Googles’s attempts at developing massively adopted messaging systems that displace Gmail and appeal to 3rd party developers is non-existent.

It’s easy to see why Facebook is keeping Google executive up at night… they are innovating at the edge and at the core simultaneously, have complete control over users social graphs while Google has to piece it together, and have a distribution capability that is only rivaled by Google. Most significantly, Facebook doesn’t seem restrained by the way that common applications, like messaging, have always worked and their ability to lever into 3rd party applications gives them an enormous advantage just at the moment.

One really has to wonder if Google’s power in the market is at an apex and when the history of today is written well into the future we will look back on Google and reminisce about what could have been if only they had more aggressively embraced change in core search, not fumbled so many product launches (Wave, Buzz, etc.) and been more willing to blow up hugely successful products in order to make them better.

Please be clear that I am certainly not writing Google’s obituary, merely pointing out that they have taken a trajectory a lot like Microsoft, just in a much shorter time period. Maybe what I am zeroing in on is that search alone is not the panacea that it was once thought to be, in other words it really isn’t a gateway to the web while Facebook is demonstrating that an ability to exist without Google and at the scale they are operating on.

Speaking of Microsoft, who now questions their investment in Facebook, which will not only prove itself to offer financial rewards but is also giving them an inside track as Facebook continues to build out platform and network capabilities that are so much a threat to Google?

2 responses to “Locked in Paradigms”