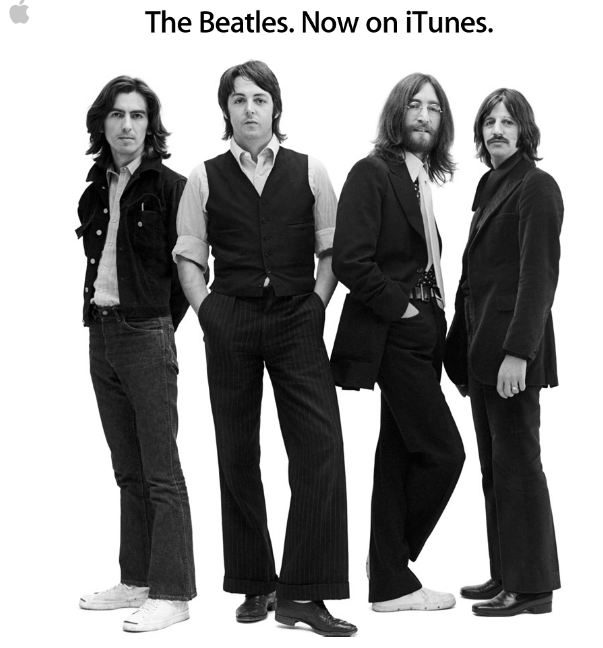 Tuesday’s announcement that Beatles song tracks are now available on iTunes has been one of the biggest positive announcements in music in some time. There are so many threads to tease apart that starting an article like this is challenging.

For once the industry doesn’t have to report declining sales figures and there is no record company suing its customers over intellectual property.  Ironically, the songs in question are the darlings of the one population that still buys CDs and does not get involved (much) in pirating.

According to Apple Corps., the parent organization of the Apple Record company that the Beatles started all those years ago, the Fab Four sold about 600 million records, tapes and CDs prior to the Tuesday announcement.  So the estates of John Lennon and George Harrison are not lacking and neither are the coffers of still rocking Paul McCartney and Ringo Starr.

No doubt, availability on iTunes will bring out many Boomers as well as their children to buy up songs that make up part of the sound track of a generation.  Boomers will seize the opportunity to go digital and fill out their collections.  But younger people seeking to learn about the roots of modern music have an avid interest in these chart topping songs and the albums they spring from.

The Beatles invented a brand of mainstream rock ‘n’ roll and the approaches and techniques they used are still invoked.  The albums stand on their own and, so far, stand the test of time.  They are works of art filled with audio sophistication that took then current day technology to the brink and energized the technical side of the music industry to up its game.

Better technology for recording and mixing as well as deeper thought about how to create a theme for and produce an album were inspired by iconic albums like Sergeant Pepper’s Lonely Hearts Club Band. In retrospect, in the 1960s, the Beatles were to the music industry what the space program was to the budding high technology market.

No wonder then that as of Wednesday morning six Beatles songs are once again climbing the charts—this time the iTunes top one hundred downloads.

But this announcement also serves as a bookend for the Boomer generation.  On the opposite end of the shelf was a concert in a rainy, muddy cow field in up state New York in 1969.  Woodstock showed demographers and corporate America how much market power the generation commanded and for decades marketers would tap into that power to generate sales and profits.  iTunes’ capture of the Beatles song book is, on one level, simply the latest example of that market power.

One response to “Beatles Songbook Gets New Life”