The funny thing about “Enterprise 2.0”, or social business software, is that it’s not very enterprisey: yes, it is deployed in enterprises, but it often doesn’t deal with the core business of an enterprise. You hear great stories about social software being used to strengthen weak ties through internal social networking, or fostering social production by using a wiki for project documents, but many less stories about using social software to actually run the essential business processes. Andrew McAfee recently wrote about his experience talking to a group of CIOs, and how they were seeing social software as becoming mainstream, but one comment struck me:

[The CIOs] weren’t too worried that their people would use the tools to waste time or goof off. In fact, quite the opposite; they were concerned that the busy knowledge workers within their companies might not have enough time to participate.

The fact that the knowledge workers had a choice of whether to participate tells me that the use of social business software is still somewhat discretionary in these companies, that is, it’s not running the core business operations; if it were, there wouldn’t be a question of participation. 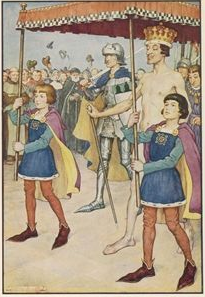 At the Enterprise 2.0 conference in June, my only blog post was something of a rant on the emperor having no clothes, since I believe that this has to be about the core business or it’s just not very interesting (and likely won’t survive an economic downturn). Interestingly, Michael Idinopulos of Socialtext was at the same conference, and saw some evidence of the shift towards the idea that ”social software delivers business value when it integrates with business process” (I wish I had been in some of the sessions that he was, since he obviously saw evidence of this opinion being further along than I did).

I’m starting to see some similar opinions emerging from a variety of sources, or maybe the recent Enterprise 2.0 conference in Santa Clara has just heated up the same discussion again. Klint Finley of ReadWrite Enterprise, hearkening back to Idinopulos’ post, thinks that enterprise 2.0 needs to be tied to business processes. Tom Davenport recently wrote about the need to add structure to social in order to bring enterprise value:

Well before personal computers enabled online chatter, they helped bring structure to work. Transaction systems like ERP and CRM, tools for workflow and document management, and project management systems all made it more clear to people what they need to do next in their jobs. That capability has undoubtedly led to productivity gains.

But work effectiveness also demands that people share their knowledge and expertise with each other. That’s where social media comes in. It makes it easy to reach out to others for help in making a decision or taking an action. And the transfer of knowledge through social media doesn’t require a lot of difficult knowledge management work in advance.

Be sure to read Davenport’s example of what’s happening at Cognizant, where they’re combining project/task management and social resources: effectively combining social and core business processes.

Meanwhile, while the social business software vendors have been stumbling towards process, the BPMS vendors have been stumbling towards social. I first presented on the ideas of social features in BPMS in 2006, and while a lot of what I predicted then has come to pass, there are many things that I didn’t even imagine four years ago. Although many vendors focus on the social aspects of process discovery and design, I don’t think that’s where the true impact will be felt: social process execution is the key to bringing together the productivity, governance and quality improvements of BPM with the networking and cultural aspects of social software. Having social features at runtime as innate capabilities for all process participants – through the entire spectrum from structured processes to unstructured collaboration – is what will really make social software (or rather, social features of enterprisey software such as BPM) mainstream.

What concerns me is the divide between social business software and enterprise software vendors. I don’t think that most social business software is capable of managing industrial-strength core business processes. I also don’t think that most BPM software is capable of doing social collaboration really, really well – at least, not yet. However, the BPMS vendors have already done the heavy lifting of creating tools to manage business processes and gaining the trust of customer to manage those processes, and I expect that we’ll continue to see rapid expansion of the social features of BPMS, through acquisition or organic internal development. Although there’s still undoubtedly a place for social business software as a standalone category, those companies looking to take on the social aspects of core business processes may want to position themselves for acquisition by one of those deep-pocketed BPMS vendors.

6 responses to “Time For Enterprise 2.0 To Get Enterprisey”