What Does GetSatisfaction Think of Social Business?

Next in our series of opinions on Social Business is GetSatisfaction.  Interested in the previous ones?  Check out Oracle, Attensity, Fuze Digital, Moxie Software, and SAP. 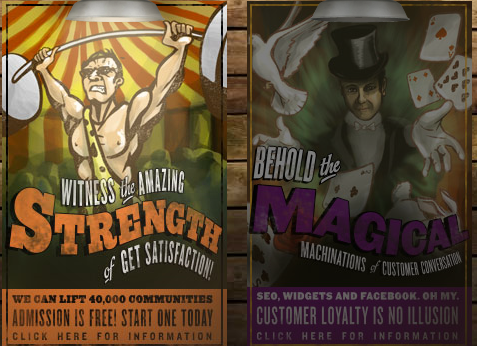 Where is the social world going in 12 months?

Clearly the impact of social networks, and I am primarily talking about Facebook, is being felt by companies that rely on social channels in any way. Interoperability with Facebook and the analytics around measurement of impact will accelerate over the next year.

The addition of mobile and location based feature sets will also be an important area for vendors and companies alike to focus on, which will bleed over into an evolved definition of localization that is much more finely grained than language selection alone.

Lastly, increasing the fidelity of social channels will emerge as a priority for business operating on social channels. There is simply too much noise in the system today and as company capabilities increase so too will their expectations of vendors. We would define fidelity as increasing signal to noise and most importantly the measurement of discrete business objectives that have a social dimension to them.

How Can Businesses Not Be Left Behind?

Some will, on each side of the vendor/customer equation. The world is changing in dramatic and unpredictable ways and the environments that businesses of all stripes operate in is changing with equal veracity.

In the medium and long term many companies have to look at social as not something new they do in addition to everything else they have done but rather as a call to action for restructuring to accommodate different modalities in their business and also how their employees interact with them. Technology is only part of the solution and just like the emergence of the Internet itself forced dramatic business change so does the emergence of social.

What is going to happen 3 years and beyond?

I can’t say with certainty or specificity what will happen in 3 years. Just think back 3 years ago… if I told you that you would be communicating with your customers in 140 characters or less and that you would be asking them to “like” you, would you have believed me? Nobody then could have predicted the dramatic impact nor the speed which it has happened as a result of social networks in 2010 and I don’t believe that predictions for what will happen 3 years out hold much water.