Not long ago, well actually a couple of years ago, I began writing about the need for increased use of video in our communications.  I was mostly thinking vendor to customer communications.

My logic was three fold, first the technology needed to create video is now available on the desk top.  On the Apple platform, which I am more familiar with, Garage Band for creating music loops, iMovie and iPhoto for movies and stills form the basis of a creative suite that enables a talented but not necessarily expert user to create engaging videos.  The Adobe Creative Suite is also powerful and runs on Windows and the Mac, but for my money is unnecessarily complex, but you need Adobe or something like it to do some of the more advanced graphics.  The challenge for the developer is to keep the video in a duration range of three to five minutes, and of course, to be engaging.

The second reason is slideshow burnout.  There are now many books on the market about that attempt to upgrade average people’s slide presentation skills because those skills are deficient today.  PresentationZen by Garr Reynolds comes to mind and there are many more.  Sending someone a slide deck as if it was a fully articulated document or mock video, exposes the deficiencies of pictures only or pictures with too many bullet points on a single slide.  Information was getting into, but not out of, slides and something had to be done.

The third reason that video creation is important involves transportation.  Slides were created as speaking aids in a live setting and while we make great efforts to use them via web conferences, something is inevitably lost.  But transportation is becoming difficult to justify, but fuel prices continue to rise and, in a recession, most organizations are in some ways restricting the frequency or type of employee travel.

It’s important to note that the above discussion includes an important caveat—most of the video coming to market today, thankfully, does not involve untrained people in front of a camera.  Instead today’s video is largely animation and stills activated a la Ken Burns.  It works well.

I have been impressed by a small crop of videos available on the Dreamforce website put there by Salesforce and some of its partners in anticipation of next month’s conference and I want to share them with you in case you haven’t been following.

The first video is posted at The Var Guy.com.  It’s a straight up recording of an interview in June with Red Hat CEO, Jim Whitehurst titled Red Hat CEO: Cloud Can’t Exist Without Open Source.  It’s a good example of old style video that puts a person in front of the camera for three and a half minutes to make a few points.  Watching is faster than reading the attached Q&A but it lacks the engagement factor that I mentioned and it makes three and a half minutes seem like a long time.

Next on the list is The State of Cloud Computing from Salesforce.com.  It’s all animation and looks like it was developed completely on a desktop; it is the type of video we should all aim at.  There are no people on screen but a narrator tells the story over a musical sound track that ducks whenever he speaks.  The piece gets its work done in only 3:09, an important criterion in an attention starved world.  Given Salesforce’s marketing budget, you can bet this was not inexpensive though I wonder how it compares to other things like white papers and webinars.  The video makes the case for cloud computing in all its forms and only brings in Salesforce and SaaS towards the end, placing it squarely in the larger context.  A good job. 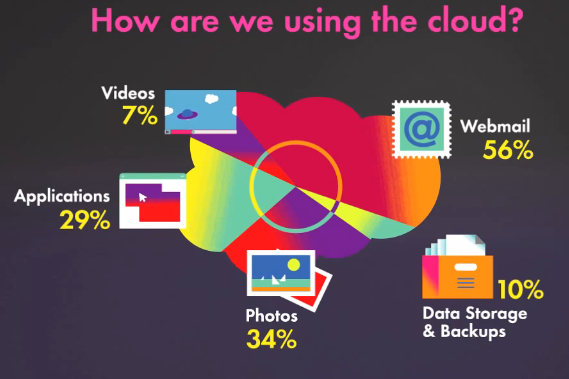 Eloqua offers a very good video, The Future of Revenue, which discusses the importance of new ideas in business.  Most of the 3:41 is table setting, intertwining the stories of several advancements in business over the last century before attempting to place Eloqua in the historical context as the next big thing.  The video is effective and I didn’t have trouble with attending to it because it draws you in as any good video should.

The last in this list is by Jess3 titled The State of the Internet .  Like the previous two, it’s a desktop effort and it has a musical sound track but no narrator and none is needed.  It is a compilation of data about Internet use attractively presented.  And while the numbers are impressive, the video is nearing its first birthday so the data represents, if anything, lower values than today.  At five minutes, it’s on the outside edge of tolerability for this kind of thing but the information is so compelling and the video so fast paced that you forget about time.  My favorite statistics are 81% of email is spam and 84% of social networking sites have more women than men.  Reminds me of a book.  Hello, ladies!

So this is a small smattering of videos but I think they point out a direction for the future.  As vendors continue to find ways to differentiate themselves in the minds of their customers, video that can entertainingly tell a story or provide step-by-step instructions for fixing a common problem, will become vital to most organizations.  The cost of production tools has dropped to the point of mass affordability, and distribution is layered on the Internet so it is free.

There are easy ways to make video viral and the need for a sophisticated approach to content distribution in an information-overloaded world is abundantly clear.  Video plus social networking may be the thing we’ve lacked with simple text delivery in a social medium—regardless of how elegantly it has been presented.  And strange as it sounds, video just might be the killer app for social media and vice versa.