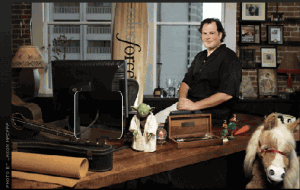 I have seen at least a dozen of my smartest friends refer to Bill Gurley’s terrific post this week before I actually got around to reading it – which I finally did.

My first thought upon reading it was of some recent discussions on StockTwits as well as among my Enterprise Irregulars colleagues, particularly in regard to Salesforce.com ($CRM) – up a mere 18% TODAY.

There’s no doubt Salesforce.com has a rich valuation, but if you agree with Gurley’s arguments, you can also argue they’ve earned it. He specifically mentions Salesforce.com CEO Marc Benioff alongside Amazon.com CEO Jeff Bezos and Netflix’s Reed Hastings as examples of entrepreneurs who both took the long view and changed the game in their industries – and have been amply rewarded for it.

It’s also notable – and probably not a coincidence – that all 3 CEOs are founders.

I’ve always been a ‘value guy’ and I have a very hard time buying richly-valued stocks. I don’t own shares of any of these companies right now – which is unfortunate for me.

Because it’s pretty clear, despite the doom and gloom that continues to pervade the tech media and investment community, that things are turning positive, and opportunities do exist to make money – a lot of it.

Today’s market is certainly not a ’99 market when just about ANY company could go public and, at least for a short while, enjoy a rich valuation. Today’s winners are, without question, much more concentrated – and under much more scrutiny (a good thing).

Nothing grows to the sky and nothing lasts forever – Cisco and Microsoft were both ‘that company that could do no wrong’ at one time – for long periods of time. So were Google and Apple, and perhaps they still are – or perhaps not.

Tech is a dynamic industry, and those of us who’ve worked in it long enough wouldn’t have it any other way. The continuous reinvention that drives the business hasn’t gone away – it’s just moved around a bit. If you’re smart enough or lucky enough to be in the place it moves to, the returns are arguably as good as – or better than – they’ve ever been.