He Was Disruptive, Send Him Packing 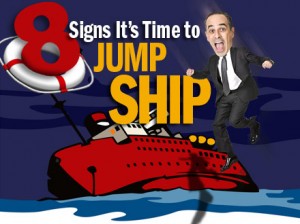 Heard about an executive recently departing a large Enterprise Software Company, “He was disruptive.”

I don’t know the man, but couldn’t help but wonder.  “He was disruptive,” has been the epitaph for many a career.

But why are they disruptive?  It isn’t just for the sheer cussedness of being disruptive.  Not at an executive level.  They were not aligned with the organization for some reason they believed in.  And is the disruptor the only one to blame?
Bosses in large organizations don’t want good people.  They want people who eliminate worries.
Sometimes we have to eliminate worries, so that the organization can get on with its focus.  In that case, the organization has deemed the worries groundless.
Sometimes worries can be quietly eliminated, because they are in the purview of a single sub-tree of the organization.  Careful though.  Always a bad thing not to hear what’s really going on inside those sub-trees.
But sometimes the worries are not groundless and the disruptors are still silenced through blunt force.  It’s easier than dealing with the worries in most cases, and less politically damaging.
How often have you been in an organization that thought it could eliminate the worries and they turned out not to be groundless?  In fact, they ultimately caused a lot more trouble than any disruptive employee ever could have.
This is why I wonder about blaming only the disruptor and sending them on their way.  If only the paranoid survive, then the disruptor may be ringing an alarm bell that should be checked out thoroughly.  There’ve been no end of companies succumb to competition from much smaller foes.  How did they let that happen?  Maybe the alarm bell ringers were regarded as “too disruptive.”
If the organization can’t sell its point of view well enough to quell the disruptors, that’s a problem too.  A crisis of leadership.  Disruptors don’t believe the party line.  They feel it is imperative not to, in fact.  Who failed to sell them?  Who failed to communicate why it was so important to stick to the party line?  Not the disruptor.  If one doesn’t believe, others also don’t believe.  How many are quietly disruptive, so you don’t even know they’re sapping your organization’s strength?  Whether the disruptor is right or wrong, you have to ask how many others share their view and what you should do about it.
Sure, there are those wanton disruptors who need to be sent on their way.  But I sure see a lot more sent packing for all the wrong reasons.  Maybe that’s what makes me prefer the very paranoid cultures.
They’re less likely to pick on the disruptors without at least looking carefully at what they’re worried about.  And worrying is not viewed as a cardinal sin but rather a virtue.

One response to “He Was Disruptive, Send Him Packing”