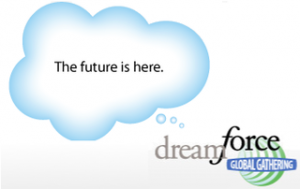 Dreamforce, Salesforce.com’s annual user meeting and thought leadership confab, is two weeks away and the anticipation for this event is palpable.  In a tough economy people are looking for the company to do some magic and lift our spirits.

The company did a smart thing by turning on its new collaboration product, Chatter, for any attendee wanting to communicate, synch or share an idea.  The result is a Facebook-like storm on Chatter about Dreamforce.  In the process, thousands of people who had no familiarity with Chatter are educating themselves.

It’s a no brainer to me that the Chatter coverage coming out of Dreamforce will be a bit better for all of the familiarizing.  This is quite different from how we all came out of Dreamforce (was it just last year?) when the company introduced the idea.  The problem was that the description had to be done in terms that many people were not expert in.  What a difference a year can make.

Dreamforce has taken on an aspect of secular saturnalia with quasi-religious undertones as people comment that it’s late this year, as if they were describing Easter.  And it is late, so late that the December date will do little to help any exhibitor finish the quarter well but it may prove to be a good injection of enthusiasm for the year ahead.

Unlike Easter though, which is calculated by a lunar calendar, Dreamforce is calculated according to the Moscone Center.  I suppose you could contemplate a Dreamforce in New Orleans, Orlando, Chicago or Las Vegas, but salesforce.com has such a strong tie to San Francisco, that it’s doubtful it would ever move the event.  So the wait for space on the Moscone calendar is what determines when Dreamforce starts.

Like the company that sponsors it, Dreamforce is many things and it morphs from year to year as products roll out and company marketing plans and market demand changes.  Salesforce has been careful over the years not to simply extend its CRM product line but to add new lines of business.  Dreamforce reflects this and consequently it will resemble multiple events rolled into one.  Just as Oracle Open World has major tracks for its applications, database, Java and Sun for instance, Salesforce will feature tracks for CRM, its social technologies — especially Chatter, its platform and its development tools.

The Salesforce product line has spread out so much that two people could easily go to Dreamforce and see two completely different events—especially if one of them is a developer who gets sucked into all of the sessions about the platform and its related parts.  And it’s assumed there will be more parts to talk about once the show starts.

I expect important announcements in most areas.  CRM is perhaps the most mature part of the company’s offerings in what has become a mature market but the introduction of the Sales Cloud and Service Cloud combined with the re-think of the associated business processes will provide opportunity for many new ideas.

Chatter offers a fresh perspective on collaboration and I hope there will be more discussion about how to use it effectively than about how to implement it.  From what I’ve seen implementation amounts to turning it on.  It’s like calling people to Thanksgiving dinner, you don’t really need to teach the how to eat.  So stories from some of the sixty thousand companies now using Chatter is all that’s needed.

Then there’s the platform.  In the last two years the rest of the vendor community has played catch up with Salesforce in cloud computing.  Everyone has a flavor of it today and most vendors straddle the fence offering single and multi-tenant implementations that deliver on the literal interpretation of SaaS but leave the benefits of multi-tenancy to discretion.

Perhaps that’s as it should be, we can’t expect a wholesale change to multi-tenancy over night for two important reasons.  First, many customers can’t or won’t contemplate the idea and second, many vendors can’t contemplate the business model change.  For them, multi-tenancy will happen in about ten years, the next time they discover that their cloud computing paradigm didn’t really protect them from obsolescence.

But back to the platform.  Salesforce has always had a lead over traditional vendors that varied in length but was always centered on its platform.  There have been important platform innovations in the last year or so including the VMforce effort but I think it’s time for something else.  So it might be that the biggest new product announcement will be in the platform area.  That would make sense because it would give the company time to consolidate its Chatter rollout on the application side of the business.

Other things to think about for Dreamforce: Bill Clinton and Stevie Wonder.  There’s no moss growing on Bill Clinton.  Since leaving the Whitehouse he’s been a tireless worker for humanitarian causes and his keynote, “Embracing our Common Humanity” is eagerly anticipated.  Then there is the incomparable Stevie Wonder who will bring his hefty songbook to Dreamforce.  To me, there is no one in modern music who combines the musicianship and lyrical dexterity of this man and I predict there will be dancing in the aisles.

So that’s what I think about Dreamforce going in.  I will post more comments from the event and hope to get some pics to share as well.  Meanwhile, have a great Turkey Day and Go Patriots!

One response to “Anticipating Dreamforce”