JP Rangaswami and the future of Salesforce.com 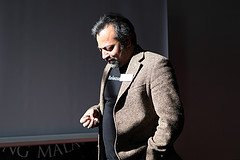 The appointment of JP Rangaswami as Salesforce.com’s first chief scientist is an interesting move. Rangaswami is highly regarded as something of a visionary among CIOs and will be a huge asset in taking the company’s message out into the European market, where I understand he’ll be spending most of his time. But I’m also intrigued to know how much of an influence he’ll have on Salesforce.com’s product strategy, as it could push the company in an even more radical direction than we’ve already seen.

I first encountered Rangaswami at a meeting in London back in 2005, some months before he left his former role at German banking giant Dresdner Kleinwort Wasserstein to become chief scientist at BT. I blogged then about his views on how enterprise applications would evolve. Those views have remained remarkably consistent and are replicated in the press release announcing his appointment to Salesforce.com:

“I’ve long thought that it’s only a matter of time before enterprise software consists of only four types of application: publishing, search, fulfillment and conversation,” said Rangaswami.

Looking at my 2005 write-up with the benefit of hindsight, one of the most striking aspects is how much of what he talked about then is exemplified by Salesforce.com’s introduction of Chatter into its enterprise application fabric. Here’s how I described the first of Rangaswami’s four application types, publishing:

“Any application that generates data will act as though it’s a content publisher, using RSS or similar to publish its data.”

It’s uncanny how that maps to Chatter’s ability to accept postings from data feeds. Similarly, Chatter is effectively an instantiation of the fourth application type, conversation: “channels of collaboration between people, either inside the organization or beyond its walls.”

Back in 2005, Rangaswami said “these four application families are the vision that we want to get to,” putting a timescale of between four and ten years to get there. I’m betting the vision is still far from complete, five years on, and what I’m wondering is what the next evolution is set to be.

In particular, I think the area where there’s still been relatively little innovation is that of fulfilment, “the application that makes things happen, most notably for customers.” However much a Siebel user from 1999 would be wowed by the ease-of-use and timeliness of Salesforce.com’s implementation of salesforce automation today, much of what the core application actually does would still be recognizable â it’s largely the same functionality, put into a Web context. I think it’s here, in the processes and operations of core enterprise activities â not just in salesforce automation but across every component of the traditional enterprise application portfolio â is where the greatest, most disruptive, innovation is yet to come. That’s where I’d be fascinated to learn what Rangaswami thinks will happen next.