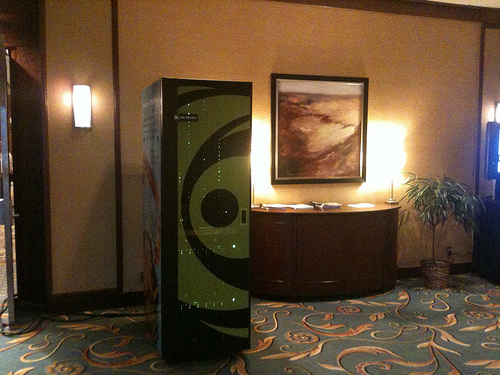 Earlier this week, I was at the annual IBM Software Group industry analyst event. It was more emphasis of the move towards solutions-based selling rather than a focus on technologies.

For every dollar an application vendor gets, there’s five dollars for hardware and services.
–Steve Mills on not being product focused

The IBM Software Group and Systems & Technology Group are even more committed than ever to a go-to-market strategy that favors services over raw products. Instead selling a database, an application server, a provisioning system, an ALM stack, or email, they’re instead selling “solutions” and the industry-tailored consulting and integration work that goes with big time enterprise IT projects.

While there’s no product wrapped around these engagements, there’s plenty of repeatable consultative work, software & hardware, integration, and overall “system” that a customer ends up buying from IBM, along with all the planes full of consultants to help them get it all running and wired up. As a reference, see the interview and demo we did last year with IBM around their Energy and Utilities work.

For IBM, this means a higher-level and higher-dollar engagement with customers. It also, hopefully, enables them to compete better by being the overall controller (and dollar taker) for projects instead of just technology pieces used in that project. The risk is being on the suite side of the classic suite vs. best-of-breed technology battles – companies that focus just on the technology are much more likely to have better innovations than ones that focus on the “whole solution.”

As an exception to this “it’s all the same, really” take, IBM has been doing new things in the analytics, collaborative space (in the Lotus domain), and in “cloud” to a limited extent that are worth paying attention to.

As a technology buyer, the big take-away is that you need only concern yourself with this bundle of efforts from IBM if you have a lot of budget and are in a management position. IBM’s go-to-market, then, has to align with that perception. But, that’s pretty much always been the case.

(To be fair, there is a “General Business” path, which means mid-market to IBM – but that’s usually a bit different than “mainline” IBM.)

Expect to see less distinction between hardware and software from IBM.

Added to this folding up of the IBM Software brands and technologies into industry-specific solutions, IBM’s hardware has subtly become more of a component rather than an ends to itself. With the Systems & Technology Group under Software Group leader Steve Mill’s belt, we’re starting to see more and more blurring (or “integration”) between software and hardware. And why not? When you’re selling solutions instead of just SKUs, you market the whole store, not just some item on a self.

Buying a handshake instead of product 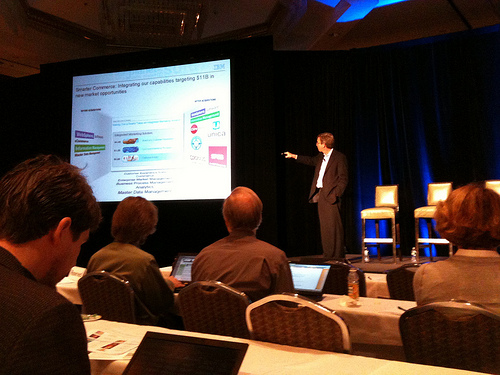 Comparison shopping is difficult; buying decisions are based on trust, not just functionality.

For analysts, all this “solutions” talk becomes very annoying: such a “product-less” approach makes it impossible to compare IBM’s offering to competitors. You can’t load up the feature attributes of an Oracle retail product into a spreadsheet and then try to compare them to an overall project that IBM has done to “transform in-store buying behavior.” Even more frustrating is the fact that there’s little to download and look at on your own: there’s just case studies and marketing write-ups of what the experience is like, at best there’s best practices and “frameworks” if you can hunt them down. And it’s not like you can Yelp up IBM services and see a bunch of 1-5 star ratings with write-ups of past engagements.

The issue with any consultative procurement decision is that you have to trust the consultant, not just the technology they use. I know what infrastructure from Amazon or Rackspace (cloud!) will do without talking to anyone – I can evaluate it – but I have no idea beyond reputation what any given “cloud transformation project” will look like from an organization selling such stuff.

Stability; IT never dies and neither do the maintenance payments; buying a hole not a shovel.

Still, for all the turmoil going on in IT – introduced by theoretic disruption from cloud and the consumerization of IT lead by innovations from public web companies (Facebook, Google, etc.) and Apple and it’s fast-followers – the flexibility that comes with the silly-putty solutions approach is a good way to hedge out and capture as many dollars as possible.

If you’re no longer the part of the driving force of technology innovation (which I would argue is a position most enterprise technology vendors are in), your next best bet is to help your high-dollar clients do two things:

On those fronts, IBM is clearly positioned to continue squeezing cash from the legacy stone – all of the tech vendor consolidation we’re still in the thick of has helped whack down the options to a nice hegemony. And when it comes to pulling in innovation from elsewhere, IBM is one of the quickest and earliest out there: Lotus has sucked in virtually all of the concepts from the Web and Enterprise 2.0 worlds; IBM’s ability to suck in analytics and big data functionality has been silently astonishing; and while their cloud technologies and go-to-market make them a bit of a cloud apostate, they’ve secured an iron-grip on “private cloud” along with other vendors scrambling to escape cloud disruption (how do you sell a luxury mainframe box or storage array when you can get Amazon CPU & disk at pennies on the dollar?).

Another angle is that many industries have not applied IT to all parts of their business simply because it wasn’t possible. The main conceit of IBM’s Smart Planet theory is that most everything in business will be directly involved with technology somehow, if not “on the network.” Software will be in everything, and everything will be networked together. This kind of environment means that everything becomes something that IBM can get involved in developing and managing. Think of the jump from manual labor on assembly lines to robotic labor – or from filing cabinets to databases.

For buyers, this approach means that in theory they get better results, not just a pile of IT that doesn’t work together. The promise of IBM having industry experts on the pay-roll fits into that, and IBM’s service arm, of course, means that The IBM Company has more to offer than a toolbox. And as a company that’s about to be 100 years old, there’s not much to worry about with respect to someone acquiring IBM and futzing about with the portfolio.