Simplifying IT: Potentially Disrupting the SAP SRM Ecosystem with a Simple but Great Idea (Part 1)

It’s rare that I encounter an absolutely novel idea in procurement technology circles. Most truly innovative companies that I’ve recently taken a close look at (e.g., Co-Exprise, Endeca, etc.) have focused on extending existing features in new ways or mashing together functional capabilities from different segments into new offerings whose chemical composition looks different than the parent contributors. Yet perhaps once every couple years, something entirely new comes along. Simplifying IT is just such a new vendor, whose value proposition to enhance ERP procurement technology is like nothing I’ve seen.
Granted, Simplifying IT is still a tiny organization (and initial customers are still in the early stages of rolling out and using their solutions in the area of SAP SRM). But the smarts and creativity they’ve combined to solve an existing problem — i.e., the lack of certain functional capability and usability in SAP procurement technology — as well as the ability to reuse SAP components in new ways to potential save 95% or more off the cost of SRM deployments or upgrades is remarkable indeed. In a series of posts on Simplifying IT, I hope to share both their product approach and philosophy to helping companies get more from SAP SRM deployments — and in certain cases, for companies not using SAP SRM but with core ECC components, to deploy an operational indirect purchasing toolset built on SAP without having to buy SRM separately.

At its most basic level, Simplifying IT simply puts a new flex front-end on front of SAP (see the screen shot below). 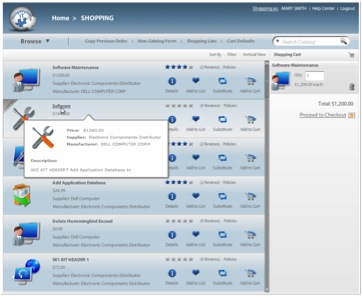 But Simplifying IT is more than just a re-skin of SRM — it brings added capability beyond usability enhancements. Its genius is that it sits on top of existing SAP components including SRM, MDM, MM PS CS and PM, connecting to these back (and front-end) components through a real-time approach that leverages a services oriented architecture that should pass the test of most CIO and architecture types. For $99K per year (including implementation!!) with unlimited users, the product may very well be the best bargain in all of procurement for companies committed to heading down an SAP platform and applications path.

Customers load Simplifying IT’s product, SBx (which stands for “simplified buying experience”) directly onto the SAP server. It then provides a separate presentation layer that is entirely different from SRM, but with real-time calls into all relevant SAP components. It leverages all existing hardware and software and does not require a separate database. Or, companies without existing SRM investments but with core SAP components can deploy SBx as a front-end purchasing toolset with many of the basic capabilities of SRM (yes, you read that correctly). However, those that opt to deploy SBx in this manner are likely to miss out on certain capabilities (e.g. the ability to buy on behalf of a colleague are not available unless the organization also has deployed SRM).

You’re probably curious about what type of people came up with this insanely simple but valuable idea that no one else I’m aware of has thought of before. The two founders are what I’d describe as expert implementation types with extensive experience rolling out SAP SRM (they also both have accounting backgrounds). In their words, they “built the product three times before to overcome some of SRM’s shortcomings” on a customized, project basis before productizing it. What features ended up making it into SBx? Stay tuned as we take a deeper look in the coming posts in this series.

One response to “Simplifying IT: Potentially Disrupting the SAP SRM Ecosystem with a Simple but Great Idea (Part 1)”