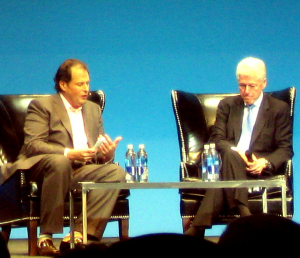 Marc Benioff is a consummate showman. He is able to get audiences roaring and is fearless on stage about saying what he wants to say and even unafraid of showing his own weaknesses – the safe ones to show at least.  He is funny and when you get beneath the rainbow colored socks, a truly knowledgeable geek when it comes to his company’s products and services. He is not only a great storyteller himself, but understands the value of stories, which is why he brings customers on stage and carefully orchestrates a conversation between him and them.

But he is also one of the smartest business people I’ve ever seen and he’s taken what is now a $1.5 billion company and has it not only competing with the $35 billion bad boys like Microsoft, Oracle and SAP but is forcing them to respond to salesforce.com, rather than the other way around.

He does this because he has embedded two things in the company’s DNA in the last 18 months or so.  First, the consumerization of the workplace and second, the requirement for continuous technological innovation from that very standpoint.

The most enjoyable way this reflects itself is by his incessant efforts at surrounding himself and his conference buds with celebrities. Meaning mixing pleasure (consumer) with business (the workplace). For example, not only did the Black Eyed Peas guiding light and  uber artist, will.i.am perform at Dreamforce 2010 and its 30,000 attendees, but he spoke in a seemingly impromptu but most clearly staged way on the value of the cloud to him. BTW, don’t underestimate will.i.am. His articulation of the value of the cloud was pretty extraordinary because of how well he understood it even though as he said “I’m probably the only music business person here.”  The dude is a genuinely smart guy – and worth listening to. Good music too.

His way of approaching that is not just to assume that the line of business users have been “consumerized” but to assume that IT has too – a correct assumption. That means that the tools that IT needs to have and the applications that they need to administer are built according to the same concepts being applied to the users and future users of these tools.  Departments and the individuals in those departments have jobs to do – and they need to feel good about doing those jobs – while still meeting their KPIs and departmental imperatives.

He also realizes that in order to innovate meaningfully – which would be innovation that provides value to customers but also to your business i.e. salesforce.com here – you have to think in terms of the contemporary trends that both impact the formulation of the concept and actually can be applied to the thinking. This is why he is so hot on Facebook – and mobile devices – and the cloud. Along with the consumerization theme.

But, he is also driven by not only being the leading “not-software” company in the world, but the most celebrated, so when Dreamforce comes around each year, it is the salesforce.com showcase for what is “amazing” and “outstanding”, which, if you believed what was coming from the varying stages of the show, is everything that salesforce.com is doing. Except that all of it isn’t amazing or outstanding. Interesting and even excellent at times, part of a coherent very smart strategy that’s working –  yes. But fireworks? Nooooo.

So what I’m going to do here, after spending the couple of days thinking through the enormous volume ofs messages, products and services that were released into the environment – with very little carbon footprint I might add – is to separate the substance from what was the environmentally pure (0.009), but nonetheless hot air we were all subjected to at times.

General Observations – The Conference Itself

One thing that is undeniable about Dreamforce year to year is that it has an energy like no other conference and is more fun than a conference of its kind has the right to be.  While I can’t say that salesforce.com ever goes to the length of mocking itself, (it has no compunctions on that score when it comes to its rivals), it does as a company, like to play.  The honest energy that permeates the event, is also reflected in the individual management at the company – people like Kendall Collins, John Taschek, Brent Queener, and many others – all in senior positions and all just plain really good people who are fun to hang with – if the chance is there (that is one beef I do have with salesforce.com – more a little later).  They are honestly nice and even though they, as senior management, have drunk the SFDC Koolaid, it isn’t a b.s. thing for them. They truly believe in what the company is and what it does and what they do – and still remain nice guys. Nice guys plus great atmosphere – and atmospherics – makes an energetic electric and feel good conference environment.

But that isn’t the purpose of the conference, now is it? Well, not all the purpose in any case.  They have a strong message they need to get across and a series of announcements to make and a significant number of tasks they need to accomplish as a unified, ahem, force, with multiple constituencies – e.g. customers, influencers, partners and now developers – so that they get the value that they planned for and paid to get.

I want to begin this part by telling you a story.

Story: Straight Ahead – No Zig No Zag

Stop me if you’ve heard this one.  No, wait, I’m still gonna tell it. Back in 2003, I happened to be speaking in Shanghai. Tien Tzuo, the then Chief Strategy Officer, now CEO of the wildly successful “middle office in the cloud”(check out what I mean when I release the Final Watchlist at the end of the year) company Zuora, happened to be in Shanghai at the same time. We were (and are) good friends so we hooked up for breakfast at some hotel that I forget.  I was writing the 3rd edition of  CRM at the Speed of Light at the time and I asked him “What’s salesforce.com’s long term strategy?”  Here’s what he told, paraphrased of course:

“We don’t want to be just CRM. CRM is something we’ll always do, but we see it as a stepping stone to something much bigger. We want to be the Business Web – the platform that when you wake up in the morning and fire up your computer at work, all your applications will be running on this. That’s where we want to go. CRM is the first step but not the final one.”

To the HUGE credit of salesforce.com, they have NEVER waivered one bit from being the Business Web,  though the name has changed to PaaS.  They’ve made missteps (keeping their programming language proprietary so long that by the time they opened it up by adding Ruby on Rails it actually wasn’t a problem anymore)  they over marketed the originality of Chatter and even, early on, its readiness. (Chatter 1 wasn’t pretty much eh – and never revolutionary – more on Chatter 2 later), but despite this hiccups – and that’s all they are – they drove relentlessly toward being the “Business Web for all your buiness applications.” While I don’t think they’ll ever be “the one” that everyone uses, they are going to be successful in their effort to be a leading platform of choice – the Business Web, which is now an ever-so-quaint term, isn’t it? So 2003.

What that entails in 2011 and going forward is the escalation of their 2007 announced Platform as a Service (PaaS) strategy with the release of the then proprietary force.com.  The success of force.com will result in the success of the “Business Web for all your business applications” that they’ve been committed to for almost a decade now.

Of course, in order to succeed at this, they need to have two groups in their back pocket – customers, natch, and developers, not as obviously natch.  The customers for obvious reasons – “your” apps means customers apps.  The developers because the 21st century social customer, to do that, has a list of demands that have to be met, among them:

What salesforce.com realized that this has two components – embracing the consumerization of the workplace and the control that the customer has of the conversation (meaning give them what they want to the extent it can be done) and opening up and expanding the development environment and building out a massive development community so that they can do all of this.

The Consumerization of the Workplace/World – and Chatter

It’s no coincidence that salesforce.com makes a big deal about their alliances with Google and Facebook – the latter particularly. They even trotted out the CIO of Facebook at Dreamforce as much to reinforce the visibility of the alliance as to have him talk about the use of salesforce.com at Facebook itself.  What salesforce has been the best in the (no) software world at figuring out is that there is a fundamental shift in the market and that business is part of life – not separate – and the visual paradigms of the personal preferences of customers as human beings need to carry to the services and applications that they provide.

One response to “Salesforce.com Dreams Big – and Forcefully Part I”