While the reigning crown prince of on-demand held court at Dreamforce last week, a pretender to the throne threw down the gauntlet and made its first full-court, concerted press into the future perfect of the enterprise software market.

Day two of SAP’s analyst summit was an all-day marathon of product roadmaps, demos, and discussions that made it clear that the company was looking to recapture some lost momentum and catapult its products – and customers – into the on-demand world. The combination of architecture, tools, products, and strategy made it clear that SAP has laid the groundwork for a concerted, multi-front effort, the success of which will ultimately hinge on SAP’s sales and marketing execution.

In other words, as is often the case with things technological, the technologists have done their jobs well, and now the real work of moving the market begins. 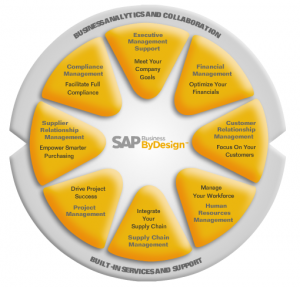 The prospects for SAP’s prospects look good, starting with Business ByDesign: In addition to its standing as an ERP on-demand product for the mid-market and the subsidiaries of large enterprises, SAP’s Business ByDesign has been reworked into a multi-tenant platform that will support the bulk of the company’s on-demand initiatives. NetWeaver, the once and future technology platform of SAP, is being reconfigured to support a hybrid on-demand, on-premise world of SAP core apps (the Suite) and edge apps (existing and pending on-demand and on-premise apps). And SAP will throw some key technologies, like in-memory computing, into the mix, hoping to drive specific competitive advantage into its efforts.

The role of ByD in the subsidiaries of SAP’s large enterprise customers is particularly interesting, as these customers are desperate for low-cost functionality and innovation that won’t put them in conflict with their headquarters. SAP told the analysts that its 400 top customers have 143,000 subsidiaries between them. That’s a helluva starting point for building a strong ByD customer base.

SAP also showcased its Sales On-demand product, which will have a very aggressive roll-out next year under the aegis of John Wookey’s team. It’s a good-looking, highly collaborative product that will give SAP a legitimate place at the table in competing with the likes of Salesforce.com, Oracle Fusion CRM, and Microsoft Dynamics CRM. Finally.

The platform strategy SAP showed was also well-considered, though it will take two years to bring it fully-formed to market. But many of the elements, particularly those that depend on Business ByDesign, are available today, and have been used to create and stage Sales OD and the on-demand talent and expense management apps that were demoed to the analysts.

Also getting it’s first full public demo was the new SDK for Business ByDesign, which will allow partners and customers to extend the data models, workflow, and functionality of ByD in order to create net new customizations and on-demand functionality. This SDK strategy is essential for customers that require more than just least common denominator functionality.

The ByD SDK has a strong precedent in the market with Microsoft Dynamics’ xRM, the company’s SDK for its CRM product. These SDKs give partners a much-needed value-added role in the otherwise low-margin on-demand market, and SAP’s ability to use the full complement of data models and processes inherent in ByD as building blocks for net-new innovation gives SAP’s partners a particularly rich palette on which to build.

Another noteworthy product rolled out in front of the analysts was the latest version of Streamwork, SAP’s think-out-of-the-box collaboration tool. The demo I saw was particularly interesting as it included a much-needed “process” template that actually showed how to get a particular collaborative process going. This is big step from the blank-slate methodology that Streamwork started out with: the entire so-called collaborative market will be useless without methods and processes for collaboration, and SAP has wisely started to step up to the plate and show the market how collaboration can be done.

Finally, Peter Lorenz, SAP’s evp for the SME market, articulated the basics of an on-demand strategy that to me makes tremendous sense. The company’s embrace of a hybrid strategy of on-demand and on-premise apps is practical, even if it violates a perceived wisdom about the purity of the on-demand model that I find ignorant of the realities facing most companies today. Similarly, the acknowledgement by Lorenz that SMEs want on-demand to run their businesses without incurring large capital expenses, while large enterprises look to on-demand to deliver innovation at the edges of the core on-premise world, is also a solid basis for a pragmatic strategy that fits the reality of the market today. And for some time to come.

All this great technology will be fighting an uphill battle in the market, particularly against the market clout and marketing budgets of Salesforce.com and Microsoft. While parts of the strategy – like the subsidiary focus for ByD – can be done on the cheap, there’s going to have to be a lot of viral buzz generated in order to compensate for the relatively modest budgets that SAP has allocated to this corner of its vast portfolio.

Can SAP on-demand have an impact? I believe so. The company will start off 2011 with a solid competitive story on multiple fronts – including a strong, multi-front on-demand message for SMEs, SAP’s large enterprise customers, CRM buyers, and partners. How the year will end is all in the execution: SAP has taken the field, now we get to see what they can do once they get the ball.