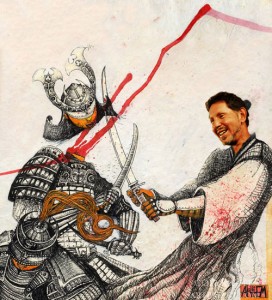 Larry Ellison makes no bones about it, he’s willing and able to compete to the death, or at least to the near death, with any and all who stand in his way. So, despite the billions of dollars in joints sales between Oracle and SAP, HP, and IBM, Ellison has been directly, and at times, viciously, attacking these three companies in very public and very over the top ways.

These are not some of Ellison’s finest moments.

Not only that, he seems to have neglected one major rival – Microsoft –  despite the fact that the relative degree of competition versus joint business between Oracle and Microsoft is significantly smaller than between SAP, HP, and IBM. This would theoretically make Microsoft a more logical target for Larry’s wrath – especially if Larry really understood the degree of the threat that Microsoft presents. More on this in a moment.

And everyone seems to be forgetting that a new player is about to emerge in the form of Infor. More on this in a moment too.

Meanwhile, the consequence of Ellison’s attacks and actions regarding SAP, HP and IBM are having the unintended effect of pushing the above three competitors into a relatively united front against the Ironman from Redwood  Shores. While SAP, HP and IBM all have many reasons to compete with one another, SAP in particular is beginning to see some benefits of being the wild card in the HP and IBM portfolios that can counter the wildness of Oracle.

SAP EVP Sanjay Poonen described this effect at the SAP Summit last week – adding that in particular his field sales team is teaming up with IBM and HP to beat Oracle as much as possible. The fact that this is happening perhaps more in the field than in the executive suite is key: field sales people are notoriously pragmatic and tactical, and their apparent propensity to team up with erstwhile rivals to take on Oracle is an indication of the value of this  new realignment, all other political realities aside.

So, with Ellison talking Oracle into a corner with SAP, HP and IBM– one based, in my opinion, on a theory about the value of the hardware “stack” that is hugely outmoded – it’s interesting how little time he spends dissing Microsoft. To his peril.

What many, Larry obviously among them, don’t realize is that Microsoft Dynamics, the former bastard stepchild of the Microsoft portfolio, is now becoming the poster child of innovation in Redmond. And Redmond is taking notice big time: hidden in the departure of Stephen Elop for Nokia was a significant upgrade for Dynamics: Kirill Tatarinov, the head of Dynamics, now reports directly to Steve Ballmer.

This is no accident, or, as one of my Microsoft contacts told me, “Ballmer is already busy, he doesn’t need more direct reports.” The reason for Ballmer’s direct interest in Dynamics is based on three newly discovered values for Microsoft’s second  smallest division:

1)      The Dynamics product pull-through: Once, in the days before Steve Raikes, there was serious talk about jettisoning Dynamics. Then Raikes figured out that Dynamics is a great driver of product pull-through. Today, every dollar of Dynamics generates from $3 to $9 in additional software sales for Microsoft. Now that’s what I call a stack sale.

2)      Dynamics’ VARs and ISVs get the software & services = Azure strategy: It’s clear that the value-add of Azure has to be about driving innovation into the enterprise, and that’s not something the average Office or Windows developer really gets. But Dynamics partners live and breath this concept every day, and Microsoft has been honing the high-value, enterprise-level capabilities of its Dynamics channel this year in a concerted effort to make them enterprise and Azure-ready.

3)      Dynamics capabilities will drive much of the functionality in Azure: Dynamics CRM is already the queued up to be the #1 app in Azure. Next stop, break up AX into components, and let the partners use them as building blocks for value-added apps. (And do so before SAP’s ByD development kit starts stealing this opportunity.) While SQL Server, Sharepoint, Communications Server, Windows Server, and other pieces of the stack will have a big play in Azure, the customer working in that innovative new Azure app will most likely be directly interfacing a piece of AX, or Dynamics CRM. That makes Dynamics essential to Azure, and vice versa.

What does the Microsoft factor mean in terms of the aforementioned realignment? Well, despite Ellison’s public neglect, Microsoft is setting up a strong case for contending for a big chunk of the market. The case starts with the SME market, where Microsoft is traditionally strong. But the Azure/S&S/Dynamics strategy is heading straight for the large enterprise as well. SAP’s recent strategic definition of the opportunity for on-demand apps to deliver innovation to large enterprise customers locked into an on-premise world plays well for the above Microsoft strategy as well.

This places Microsoft front and center in a battlefield where it is deploying 21st century technology against an Oracle that fighting the battle as though this were still the 20th century. We’ve all seen this movie before: Black Hawk Down is just one version of the danger of deploying sexy but old technology in a battlefield that has evolved in the middle of the war.

With Microsoft starting to outflank it – its version of a stack is a warehouse full of interchangeable, plug and play container-sized data centers, with virtually no on-site maintenance needed – Larry is driving Oracle towards a focus on hardware that starts to look a little tired.  Sure, we saw genuine innovation from Oracle at Open World this fall, but it was buried in a corporate message about hardware and a strategic necessity for a little too much middleware in order to deploy this innovation. Fusion looked good, but it’s not yet ready for the market, and the shenanigans surrounding the circus atmosphere preceding and during the trial against SAP was an unfortunate distraction from the business of actually building and selling innovation.

In fact, I think the impact of the trial will rebound against Oracle as the negatives  – mostly centering around the lawyering-up of the enterprise software market – start to come home to roost. I always felt that Oracle would be hard-pressed to show that its hot-footed, heavy-handed pursuit of SAP would have a measurable payback in either market share, stock price, or customer preference, and the impact of adding the fear that Oracle is ready and willing to lawyer up to win in the market will start to trickle down to the customers as well. No vendor wants its customers to worry that they could end up facing down the likes of David Boies if things start to go south.

Meanwhile, I have yet to find a single customer who thinks more highly of Oracle since the trial, or for that matter, less of SAP. I do know a number of customers who have really been scratching their heads at Oracle’s conduct, and I personally worry that the lawyers seem to be running Oracle more and more, to the detriment of the people at Oracle who actually develop, market, and sell product. I love lawyers, including the one I employ to help me when my business dealings need it – but the day he becomes a strategic asset to my business development efforts is the day I look in the mirror and start slapping myself around.

So, with Oracle facing a number of potential self-inflicted wounds of late, Microsoft on the rise, and HP/SAP and IBM/SAP starting to work better and better together, the market is starting to shift gears once again.

And waiting in the wings, but not for long, is Infor, with Charles Phillips at the helm, ready to start throwing its weight around.  I firmly believe that Charles Philips, aided and abetted by Bruce Richardson, the former AMR analyst, is calmly dissecting the market and getting ready to launch a new strategy that will have Philips old company occupying that bullseye in the middle of the target.  Not because anyone is vindictive or out for revenge – not in our industry – but because Oracle’s strategy is the one that’s looking a little stale right now. I for one can’t wait to see what the new Infor is cooking  up for the market.

So, it’s almost 2011, and my prediction is this: fasten your seatbelts. The new year will bring a shifting of forces and interests that would make Metternich drool and leave Kissinger gasping for air. And regardless of whether you believe any of the above, you have to grant me this last fact: boy, is 2011 going to be an interesting year.

7 responses to “The Realignment of the Enterprise Software Market: Oracle vs. Everyone, Microsoft in Ascendance, and Watch out for Infor”