Smallcompanyitis: Death by a Thousand Committees 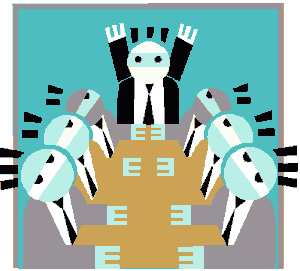 I realized something recently that in all my years had thus far escaped my attention and it is direct commentary on the distinction between large and small company culture.

A common belief is that small companies (startups in the Valley vernacular) are nimble because they can’t afford to waste time. This is quite true but the difference between successful small companies and meandering ones is that the successful ones value time over perfection and embrace people who are willing to fail as much as succeed. Okay so this much is probably known to you so bear with me.

A common misconception is that the path to decision in a small company is much quicker than that of a large company. It is wrong to assume this because of a unique characteristic of large companies known as turf. In large companies managers of all levels measure their power by the turf they control and a natural reaction to interlopers, other groups who wish to be party to decisions large and small, is to repel them.

In a small company it is quite common for every decision to be made by committee because the stakes are very high for failure and because the interpersonal dynamic in a small company favors consensus, even if the victim of consensus is decision. It is quite strange but I’ve seen it enough to know it is true… every action requires group consent.

I don’t wish to suggest that large companies are more nimble or quick to act than small but it isn’t because they are large, it is because they allow mediocrity in their management ranks and allow process to overcome action, but small companies are just as prone to mediocrity for a different reason, because it is allowed to happen as a result of the unwillingness of the people involved to just act decisively and unilaterally.

2 responses to “Smallcompanyitis: Death by a Thousand Committees”