America: Built by the Little Guys, Not the Big Ones 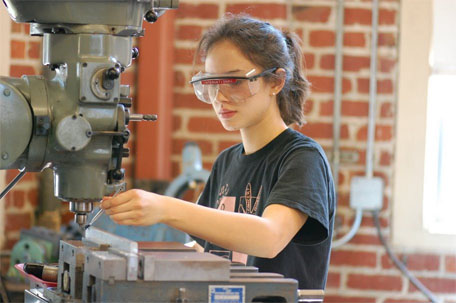 I correspond with quite a lot with friends in the Manufacturing world, as one of my big interests aside from software is building things.  Come to think of it, that’s really my interest in software too!

For a long time there has been a great hue and cry about the demise of Manufacturing in the US.  It’s been a victim of outsourcing, fewer and fewer new entrants to key careers like being a machinist, automation killing jobs, social pressures around whether blue-collar manufacturing jobs get the respect they deserve, the scarcity of good vocational programs, and so on.  On the one hand, the big manufacturing economy seems more and more hostile to its professionals.  They want to outsource overseas, pay as little as possible to button pushers on soulless assembly lines, insist on credentials over wisdom and experience (ask a room full of grizzled veteran machinists what they think about the new kid just out of Engineering school some time), and all the rest.  Plus, some of these corporations have been very poorly run and they want to make their workers pay the price through layoffs and other wage cuts.

On the other hand, it’s a great time if you’re an entrepreneur who wants to be a small business owner.  Why?  Because a talented individual can start a manufacturing business in their garage and turn out amazing products.  Because the Internet makes it possible for that individual to reach an audience they never could have 10 or 15 years ago.  It also makes it possible to draw on the wisdom of your peers in ways you never could have years ago, using forums like this one, for example.  Because the software needed to do world-class manufacturing can be run on a PC in the home office.  And above all else, because if you can imagine it, you can actually create it for the most part.  Here in Silicon Valley, we’re used to the idea that a couple of developers in a garage can create world-class software, but the idea they can also manufacture world-class products is one that hasn’t yet sunk in.  The technology has come a long ways, and I believe it will make a difference in ways we haven’t yet seen.

Where my kids are concerned, I’ve tried to teach them that the heroes are the small businesses and small business owners.  I live in the heart of Silicon Valley, and there are companies large and small.  I have to say, the folks that own their own businesses and are just off the edge of where the hyper competition spotlights shine are the happiest people I know, and they often make just as much money as all but the über rich who start companies like Google.  I’m not talking about just software developers, I’m also talking about friends with blue-collar businesses like building contractors (talk about a hard hit industry, but if you have a reputation as a craftsman, you can still make a good living) or jobs many find boring, like accountants.

It’s not a popular point of view, but I believe America wasn’t built by the Big Companies, but rather by the Little Ones.  After all, small businesses create most of the jobs in our economy, and every country has Big Companies.  In many industries the biggest companies are not US companies.  But having the “get out there and build something for yourself spirit” is what really makes the difference.  We admire people like Henry Ford and Bill Gates, but we shouldn’t admire them for how big their companies got, but rather for how they conducted themselves to put their small companies on paths to greatness.  Microsoft is as big as its ever been today, but it isn’t the same company it was when Bill Gates started it.  The list of Big Companies that are mere shadows of what they were as Small Companies is long and there are not too many cases where the Big Company is a better company than the Small One it used to be.  Vinnie Mirchandani bemoans “Cash Cow Disease“, where investors think the Big Companies should quit innovating and start passing out their profits to shareholders.  Given how poorly many of them seem to perform later in life, maybe they should stick to their Cash Cows and leave the rest for the little guy.  It’s intriguing to think about which strategy would yield a better economy.

So take heart, entrepreneurs in all walks.  The New Year is coming.  What new Small Company will you start?