Get rid of the Calendar, and the Watch too

Those are leftovers from the industrial age and the biggest impediment to an effective society.

Before I hear the protest I can just as well agree that sometimes it’s needed; like when I’m to meet somebody for a spot of lunch, or when an airplane or train operating company wants to ferry me and 120 other people at the same time, in the same contraption from A to B. Then exact time, and location, is useful.

But for me to work, for me to do my best? Mondays better than Sundays? Why on earth that? What if it rains on a Sunday so I cannot cycle while Monday is sunny and balm? Why not leave that to me?
What about that utterly stupid notion of a “deadline”? What happens when you give somebody two weeks to deliver? What would you do? First week you’d go “I’ve got plenty of time”, second week, “better get started” until you go “shoot, have to do that job”. Ever seen a task being delivered in one day instead of the two weeks you gave the assignee? No, that would have been an insult to your ability to estimate the time that a task would take!

And come to think of it, your focus will always be your, eh, focus. Would it not be more sensible to focus on the undone task at hand instead of the future (hopefully) done task? When I participate in a race I go when they shout “go”, never linger even if I think I have all the time in the world. When cycling fast downhill the practical truth is that “you go where you look”.

You can even translate the “scheduling monster” into company losses; I think you’ll recognise what Jeffrey Phillips describes:

I’ve noticed that the bigger the corporation is, or the more a manager tries to “look busy”, the harder it is to set a meeting. Invites goes out, scheduling conflicts punted back and forth and at last a WebEx invite appears in my Google calendar. And that for an online meet! Heck, I’m next to my computer all the time, why don’t you ping me and see if I have a half hour? I almost always have, and if not I simply go “sorry busy on another call, I’ll ping to see if you’re in when I’m off the call”. 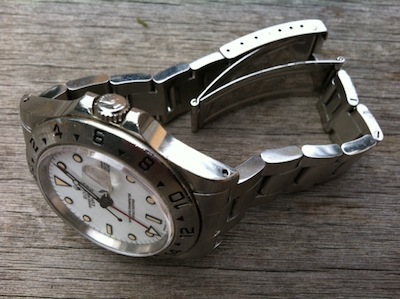 I once built a working workflow for a advertising agency, starting off with the current processes from customer request to start of an advertising campaign: As they were it all pivoted around four “big meetings” where one of the “owners” had to be present, effectively throttling all activity to a grinding halt before it fanned out again to the “creatives”.

Now my workflow, using a work processor delivering tasks and information and capturing all ongoing, made everything visible so there would not be any need for such meetings. Everybody would be able to see what was going on, and even jump in, in real time. No need to get together to “see” the progress and assign new tasks (“action items” anyone?) as that particular work processor did that nicely indeed, entirely without communal doughnut consumption.

With an average seven weeks from start to end for their projects, where I assumed half a week average delay from instant for each meeting due to “sorry, I’m busy on Thursday”s (that I would argue was very optimistic), we could cut the time from seven to five weeks per project, on average, without losing anything but thumb twiddling. With a 20% profit margin today it would translate to a tripling of their profits.

Did they go for this no-brainer? Nope, the two owners would not hear of it, their controlling habits and methods where not to be touched, and bah humbug to tripling of profits. Ah well, their prerogative, they did not have outside investors. Maybe I should have had a chat with their spouses over lunch at Harrods?

Status quo is always “warm and fuzzy”, but the race might very well be on, and they might find that not coming first out of the gate actually will have practical ramifications.

This, by the way, is what “Business modelling” is all about; “how to use resources to deliver the value and keep as much of that value as possible” – and for most, the most important resource by far is time! Start the pivot by rethinking the calendar and the Watch, old industrial age things they are.

One response to “Get rid of the Calendar, and the Watch too”