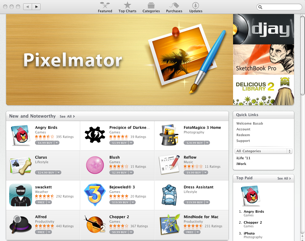 Nowadays, it seems everyone is launching an app store. Google Chrome has a Web Store. Amazon.com announced an App Store for Android Apps, that will compete with Google’s Marketplace. And of course, there’s the big daddy of app stores – App Store on iOS for the iPhone and iPad.

For the App Store owners the motivation is straightforward – an additional revenue stream. Apple charges 30% to App developers plus a registration fee. For everyone this is an additional way to monetize users and a platform.

But what’s in it for users? Quite a bit, I believe. Which is why I think App Stores will succeed for mobile devices, consumer apps and enterprise apps.

For small app developers its a no brainer. For established players like Omingraffle, if a significant portion of their revenue stream gets diverted to the Mac App Store, they will need to make up for what they pay Apple in App Store fees in the form of incremental revenues. I suspect that will happen. In any case, they don’t have an option. They have to be available on the Mac App Store.

I see App Stores taking hold and becoming a fixture. Which means that making a platform successful (Force.com, Google Docs) suddenly became worth a lot more.