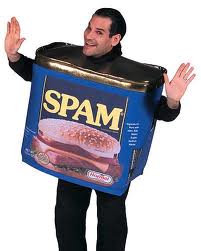 I’m watching with some interest the growing meme about Google passing on too much spam in the search results.

Mathew Ingram does a good overview while claiming Google is on a collision course with Demand Media.  He mentions:

–  Vivek Wadhwa, who says we desperately need a new and better Google

–  Marco Arment–”entire categories of searches swamped with spammy results”.  Marco mentions Jeff Atwood’s excellent Trouble in the House of Google where I first saw this meme, as well as Anil Dash’s roundup.

The most recent was Danny Sulllivan’s write up on the Blekko spam clock, which came to me via Techmeme.

Most of these peeps are whining that content farms and SEO mavens make it too hard for Google’s once-uber algorithms to figure out what not to show in search results.  Atwood quotes Google’s webmaster guidelines which say, “Google will take action against domains that try to rank more highly by just showing scraped or other auto-generated pages that don’t add any value to users.”

Here is the thing, folks: Google profits from at least some of these spammy sites.

I wonder whether any of the bloggers writing about this have actually bought Google AdWords and then sat down to read the reports.  As it happens, I use Google AdWords for my CNCCookbook hobby business.  I started doing it just so I could learn how a bootstrap company can market on the cheap (AdWords ain’t it, BTW, but you learn a lot of cool stuff playing with it) and a host of other things.

One of the things you will notice is that there are several channels where AdWords come in to play.  One is those good ole search result ads we’re used to seeing.  Many likely see that as most of what Google is about, and something they should take care remains valuable through high quality search results.  Ahem!

The other two involve what are called “Display Networks”.  We have “Managed Placements” and “Automatic Placements”.  Do you ever wonder how a Content Farm makes money?  Through ads, of course.  Do you think Google will sell ads on their behalf?  Are you starting to get the picture?

On my AdWords report as I am writing this, 80% of my cost, and hence Google’s revenue, is via these Networks, not via Search.  It seems the esoteric world of CNC technology and manufacturing doesn’t have enough search to support the revenue aspirations of Google, so they turn to these other sources.  BTW, memo to would-be bootstrap and other marketers, while there is obviously click-through on these sites, and it is decent, the results at the other end in terms of people buying something on your site are terrible.  You’d really rather buy search ads and skip the network as much as you can.

But wait, aren’t at least some of the places Google advertises in the Network legitimate sites?  Sure.  I took the time to go through and visit every one of the ones on my report.  About 25% were sites with real content that was useful.  The rest were bogus, though often very creative:

What would you call a site that is nothing but tons of brief blurbs about free software you can download?  It’s definitely derived/scraped content of some sort.  There was no place on the site for me to submit my own software for download.  Screen scraper?  Content farm?  Seems like it.  That was #1 in cost on my report, and I have now shut it down.

How about a site that purports to sell a cool little piece of software?  Promising.  Click the download link.  Hmmm, I just downloaded a toolbar for my web browser and not the software promised.  Wanna bet that toolbar is more spam?  Back on the site, I did finally see a link that purports to download their software.  It was labeled in a smaller font and without the colorful Download! logo of the spambar.  Welcome to the #2 biggest cost on my report, also shut down.  Fortunately my budget is only a few dollars a day!

Wanna see a spammy site up close and personal that benefits Google?  Check this one out: a fake Mastercam (world’s most popular CNC software) blog.  Clearly they are re-purposing a customer forum of some kind from somewhere.  I get links to this site regularly from Google Alerts.  It’s filled with Google Ads, but you can’t find the original source by searching in Google.  I know, because I have wanted to respond to some of the threads from time to time.  The site is run out of China, according to Whois.  The next time you run into a bunch of spammy search results, take a minute and see whether their ads are all Google generated.  BTW, the colorful fake software download logo was served by Doubleclick–Google by another name.

Come on, guys: do you really think the brilliant minds at Google can’t cut out some of this spam if they really wanted to?  Are the algorithms so impossible to build?  Pssst, I got some excellent only slightly below sea level real estate I’d like to sell you!  Sites like the fake Mastercam blog couldn’t exist without Google.  Google brings them traffic and conveniently monetizes it while they’re at it.

Now here is a fascinating other observation I’ve made about my web marketing experiments.  Would you believe that Bing searchers are much more likely to buy my products than Google searchers?  On average they are about 1.6x as likely.  Heck, even AskJeeves converted better than Google.  Competition is a good thing!

What a pity I only get 1/25th as much Bing traffic.

Getting back to Mathew Ingram’s post, how can you be sure there will be a showdown between Google and Content Farm Demand Media until you know how much revenue Google gets from such content farms?  Hey, don’t take my word for it off my AdWords reports, take a look at Google’s own numbers.  In 2007, about 65% of ad revenue was from ads on Google-owned sites like search.  That left 35% on non-Google sites.  In Q3, the most recent period they report, Google sites were down to 60% of the revenue.

Looks like the growth is not in search.  Wonder how long before the lines cross altogether?

2 responses to “Silly Rabbits: Google is for Spam not for Search”