The Invisible Jurisprudence Hand: Will the Lawyer Problem Take Care of Itself? 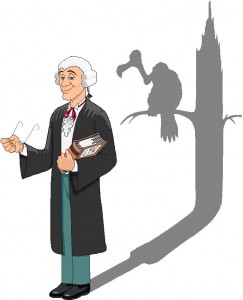 Let’s face it. Companies spend far too much — even after sourcing and category management efforts — on legal spend. According to one study I glanced at from BTI consulting, the average Fortune 1000 company spends roughly $19.4 million on outside counsel per year. After all, in the US, we work in an environment where special interests make true tort reform all but impossible to pass, so billions of dollars are wasted annually on lawyers without adding any value to society through new innovation. Yet perhaps the ideal remedy to this problem won’t just come from government but from the invisible hand itself, as fewer people enter law in the US and as legal process outsourcing grows in low cost countries like India.
A recent, must read article in the New York Times suggests that “since 2008, some 15,000 attorney and legal-staff jobs at large firms have vanished, according to a Northwestern Law study.” Moreover, law schools appear to be distorting the employment record of recent grads that might not be as gainfully employed as an alumni survey suggests. Consider that under current definitions of employment, “a law grad, for instance, counts as ’employed after nine months’ even if he or she has a job that doesn’t require a law degree. Waiting tables at Applebee’s? You’re employed. Stocking aisles at Home Depot? You’re working, too.”

If legal jobs continue to vanish in the US as companies get smarter and more efficient at managing legal spend internally and with global providers, it will be a signal for aspiring attorneys to pursue professions that actually contribute to society, aside from sucking at its teat. The less lucrative and more risky we can make the legal profession, the greater the chance that it will decline in overall appeal and value. So if you’re in corporate procurement, do your job by speeding up what appears to be a Darwinian trend that is just starting to reduce the appeal of the legal profession. Invest in the right matters management systems and processes. Identify offshore providers. Source legal spend more aggressively and frequently by segmenting categories into a matrix just as you would other spend areas.

Do this, and let’s cross our fingers that the lawyer problem will, at least, partially take care of itself in a generation or two. Who said procurement couldn’t change society, one less lawyer at a time?